A minor has attacked this Wednesday with a white weapon to his father, 51, at the doors of the Public School of Fuensalida (Toledo), which has caused injuries t A minor has attacked this Wednesday with a white weapon to his father, 51, at the doors of the Public School of Fuensalida (Toledo), which has caused injuries that have made the transfer of the injured to the Virgin Hospital of Health of Health. Toledo, while the aggressor has been arrested.

According to sources from the government delegation in Castilla-La Mancha, the event took place past 9.00 hours at the doors of the Public School Counts of Fuensalida, where the child has been arrested after aggression by a civil guard who was out of service.

Then a citizen security patrol of the Civil Guard has come to the place, which has been charged for the custody and transfer of the child.

The assault has been served by a doctor of emergencies at the place of aggression, Avenida de España, and then has been evacuated to the Virgin Health Hospital in a basic vital support ambulance (SVB), have indicated EFE sources of the Emergency Service 112, which have added that a mobile UVI and Fuensalida Civil Guard agents have also been displaced to the doors of the school.

1 They stop at Las Palmas a 31-year-old man who tried... 2 The parliamentary partners of the government raise... 3 'The Chicken' Carvajal offers the judge evidence of... 4 The Government proposes to suppress the provision... 5 Globalia announces an erte that will affect 9,000... 6 Three joint accounts without commissions to organize... 7 The Haitian Diaspora drowns her hopes on the River... 8 They try to assassinate the principal advisor of the... 9 Johnny Depp: The culture of cancellation is contaminated... 10 Seven ministries develop the artist's statute after... 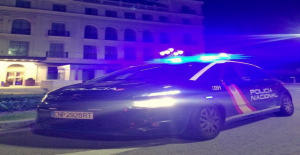 They stop at Las Palmas a 31-year-old man who tried...