video games are often accused of patronizing behaviour which is deleterious such as addiction, social isolation and violence. But for american health authoritie video games are often accused of patronizing behaviour which is deleterious such as addiction, social isolation and violence. But for american health authorities, they can also be used to treat certain mental disorders, including the disorder of deficiency of attention (ADHD), which affects 6 million children in the United States. The u.s. agency drug administration (FDA) has just approved for the first time the sale of a video game on the ordinance to children aged 8 to 12 years.

Designed by the company specializing in video games therapeutic Akili Interactive, EndeavorRX places the player in command of a capsule flying on iPhone or iPad. Launched on courses set in fantastic worlds, he must catch bonuses while avoiding obstacles.

A concept similar to other racing games on smartphone, but benefits for mental health, argues Akili Interactive. According to the company "EndeavorRX is designed to directly stimulate parts of the brain through sensory stimuli and exercises that improve cognitive functions".

A complement to medication

To prove this, the company has financed a study published in The Lancet, which shows that patients with ADHD have experienced improvement in their symptoms after playing regularly at EndeavorRX. "These results deserve to be studied in depth", temporise the authors of the study. There is no question that the game completely replaces the existing treatments for ADHD, but that it comes in addition to them.

In all, five studies have been conducted on more than 600 children, of which 9% have experienced side effects such as headache and nausea. But these disadvantages are largely offset by the benefits of the game from Akili Interactive, say the researchers, whose findings convinced the FDA to allow the prescription of EndeavorRX to deal with the disorder of deficiency of attention.

"EndeavorRX provides an option for non-drug to treat the symptoms associated with ADHD in children, and is an important example of the growth in the field of the therapy of digital", said an official of the FDA. This last warns, however, that this video game must be used in conjunction with psychiatric care traditional.

1 A big ministry of Tourism demanded by the professionals... 2 Out of boredom and loneliness: a teenager is stuck... 3 Abuse in the family: The evil stepfather 4 Decision of the Federal government and countries:... 5 Basketball final tournament: The Skyliners go 6 Frankfurt Awo process: No Deal with Jürgen Richter 7 Corona eruption near Gütersloh: All schools, sealing,... 8 F. A. z exclusive: the First woman in the leadership... 9 Peter Brueghel the younger away 629.000 euros at Artcurial 10 In Paris, Lyon, Lille or Marseille, the Fête de la... 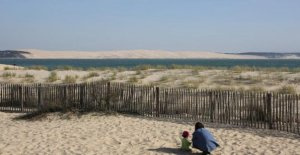 A big ministry of Tourism demanded by the professionals...