Excarcelling in April 2020 from Francisco Javier Almeida, detained last Thursday for death in Lardero (La Rioja) of a nine-year-old boy, Álex, took place in the Excarcelling in April 2020 from Francisco Javier Almeida, detained last Thursday for death in Lardero (La Rioja) of a nine-year-old boy, Álex, took place in the midst of the discrepancies among the agencies in charge of granting it.

The Penitentiary Treatment Board of the prison where it was then, the Bacts (Cantabria), the organ to whom it corresponds to classify the inmates in the different grades and report on their progress or setbacks according to their evolution, opposed in February of 2020 to grant the third degree and therefore provisional freedom.

The decision of the Board, which was taken by a majority although with differences between the different technicians who evaluated Almeida, was appealed to penitentiary institutions.

This agency, dependent on the Ministry of the Interior, resolved in February last year in favor of the REO and granted the open regime. At that time, Almeida, who had been sentenced to 30 years by a crime of sexual assault and murder committed in 1998, had already fulfilled three-quarters of the sentence and had enjoyed permits - until he was granted - without incident.

Two months after the approval of penitentiary institutions, in April 2020, the Penitentiary Surveillance Judge of La Rioja, a Community that Almeida had been transferred, endured the passage of almeida of the second to third grade and the prosecution was not opposed so he was authorized.

Almeida, which fulfilled the whole of the penalty in 2023, had already requested the third grade in 2017, when it was 19 years in prison and had three quarters of the penalty. Then, also with the unfavorable report of the treatment board, he was not granted.

The spokesman for the PP in Congress, Cuca Gamarra, today required the Minister of the Interior, Fernando Grande-Marlaska, who adds "responsibilities" and explanations about "why a killer had a third degree when the treatment board itself denied it ".

Gamarra also moved "the commitment of his party to strengthen the rule of law and the hardening of certain penalties that are absolutely necessary." "You have to respond to a society that is crying a lot and has a lot of anger inside," he concluded.

Francisco Javier Almeida had the door of his open floor and the child unconsciously when a group of parents who was looking for him discovered, which indicates the researchers who was probably about getting rid of him.

The wife of one of these parents has reported Europe Press what happened. "When the notice of going looking for the portals, an 11-year-old girl who had been harassed, said the portal, saying it was where the man was," the woman told her, named Susana.

Her husband and two other parents entered the building and called all the rings "until they arrived on the third floor, and they met this man with the door of his open house and with the child in his arms, already unconscious."

The alleged killer told them that "he had fainted, that he did not know anything, and that he had found him there." Parents tried to revive the child without success as they went down the elevator. "My husband has passed very bad night, he is without sleep, he does not speak, he can not take away from his head" what happened, said this neighbor. "I was surprised to see him as quiet and so normal, they did not give him credit that he would have been and was like that," she added.

1 Allies of the US and Europe warn Iran about its provocative... 2 Trump wants call logs and aide notes to be kept secret... 3 G-20 opens with a call for more vaccines to be available... 4 How 'Let’s Go Brandon' became a code to... 5 During US debate, Biden receives Communion from Rome. 6 Americans can see what they want in the Rittenhouse... 7 Virginia's election will be a post-Trump test... 8 During decades of climate negotiations, the Earth... 9 Stargazers: A firework show called Northern Lights... 10 It's heartless! Artists: NYC tribute taken out... 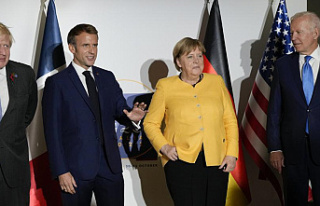 Allies of the US and Europe warn Iran about its provocative...