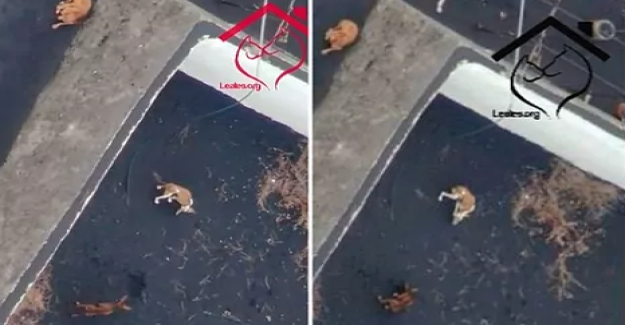 The Director Committee of the Canary Islands Volcanic Emergencies Plan (PEVOLCA) has authorized the attempt to rescue with drones of at least six powers trapped in two ponds surrounded by the Lava del Volcán de la Palma, have reported sources of the autonomic government. This authorization occurs after receiving a formal rescue request and after analyzing the action plan presented by the company that will be responsible for the operation.

The plan is based on using modified marine logistics cargo drones to reach dogs, at least six powers found in two ponds surrounded by magma, as reported by the Loyalist animalist platform. This organization points out that more than two tons of state-of-the-art equipment worth 60,000 euros has been transferred to La Palma.

Drones, who belong to the company Aerocamaras, hired by the Leales.org platform, are endowed with a pioneering system of capture and loose network in case of emergency for animals up to 20 kilos approximately.

For four days, three engineers together with the Aerocarte R & D Technical Director and Research designed that innovative system that allows an animal to be trapped and moving it into flight. It had never been proven before because the Air Safety Laws of Spain prohibit the transfer of animals via Dron, adds loyals.org.

On Tuesday, the drivers expert in drones have moved to the advanced command post to show the tests of their equipment. They trusted to overcome the initial rejection, since this plan does not affect the possible evacuations, nor host terrestrial communications and less lives in danger, since it is some drones piloted at 450 meters from the target.

Three people have been transferred because they will go to the rescue a team of three drones: one load for the transfer of materials or rescue of the dogs, another dron with a 30-raised camera to make a sweep of the area and verify the safety of the operation , and a specific third with thermal camera to study the terrain and know what is the tour where there is less heat.

In case the rescue is not possible, it will be attempted to move the ponds some kind of refuge and food in more quantity, among other possibilities, to save the life of animals.

The height of the Earth that lurks to the pond is like a giant that the volcano pushes a centimeter by centimeter, with the risk of burying them with a simple detachment by earthquake, if a new lava tongue does not take place before, add the organization Animalist

The system is a pioneer in Spain and will be proposed by the Animalist Organization to the Autonomous Communities to contemplate it in the evacuation plans of animals in catastrophes where the life of the rescuers, such as fires, floods, earthquakes and volcano.

1 The Government will transfer 1,010 million to the... 2 The electric car remains uncontrolled in rural Spain:... 3 The city of Zamora reaches zero incidence: no new... 4 Three million children could be vaccinated this fall:... 5 Sánchez is committed to reaching 90% of vaccinates... 6 Australia puts an end to quarantine in Melbourne,... 7 The Great Mecca Mosque, 100% capacity for the first... 8 The first space cinematographic expedition returns... 9 Investigate 200 deaths in the study of an experimental... 10 The probable absence of Xi Jinping at COP26 irritates... The Government will transfer 1,010 million to the...