Barcelona : the opera house reopens its doors with more than 2000 plants as spectators

The lights come on, the curtain rises and a string quartet begins to play. But the return to normality is only apparent at the Grand Theater of the Liceu of Bar 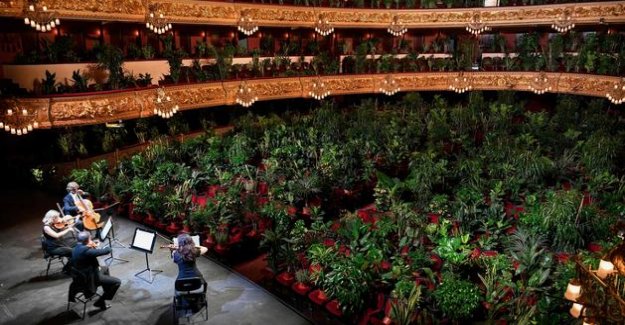 The lights come on, the curtain rises and a string quartet begins to play. But the return to normality is only apparent at the Grand Theater of the Liceu of Barcelona, where the seats are occupied... by 2.292 plants.

After months of silence, the iconic theater is back in business on Monday with a metaphor of the months of confinement during which the nature has resumed its rights. Ficus trees, palm trees: 2292 plants occupied the parterre, the amphitheatre and the three floors of the balconies of the iconic hall of barcelona, the green contrasting with the red of the chairs and the gold of the columns.

On stage, a string quartet has interpreted the Chrysanthemums of the Italian Giacomo Puccini with just as much professionalism as a normal public. Imagined by the artist Eugenio Ampudia, this show was to invite the human beings to reflect on the "sustainability" and their "relations with nature". The idea came to him during the confinement listening to the birds singing, louder than ever, and seeing the plants near his house to grow more vigorously. "I said to myself : why not enter the Liceu, such as weeds, colonize, and that the nature starts to push around in order to transform it into something living, even when there's nobody there ?", explained Mr. Ampudia at a press conference.

read also : Spain reopened the roads and the border with France

It is "a visual poem which, at the same time, is a metaphor that is subtle, which gives us back the smile" was described by the artistic director of the Liceu, Víctor García de Gomar. The concert was broadcast live on the website of the theatre so that interested people can relay it to their plants at home. "This is a concert like any other and we respect the audience as during all events conducted at the Liceu," said Eugenio Ampudia.

"I think that all of these plants, within themselves, in their cells, in their photosynthesis, incorporate now the fact that they participated in this concert", he added. After the concert, all the plants will be given to health professionals who have struggled in recent months against the new coronavirus that has killed more than 28.300 people in Spain.

The editorial team conseilleSpectacle, theatre: is it really necessary to take their subscription for the next season?Christophe Tardieu: "Our thirst to return to the cinema will not turn off!"In a cinema in paris, ultimate preparations before the réouverture2 commentairesChaffinchle 22/06/2020 23:23

watering these plants? Charge of the light necessary for their "breathing" (photosynthesis)?The gardeners had replaced the artists...

I don't know if I'm going to wake up of a horrible nightmare or the human being saw his brain liquefy at the speed of this pseudo artist delusional... That a theatre such as the liceo lends itself to this mockery hysterical well pensance debile and far-fetched shows the state of decay of our western civilization that will not withstand the superior Russian and chinese, they, do not fall in the flagellation mortifere...

1 Data cans, fake bookings,hashtags hijacked... The... 2 After a hangman's noose scandal: tears at Nascar driver... 3 Wiesbaden-in the second League: With dignity say goodbye 4 IT hurdles for the company: Almost all of the want... 5 Forecasting the economy: The recovery can begin 6 After the Corona onset: Laschet Lockdown for the district... 7 The producer Steve Bing kills himself by falling from... 8 Michael Keaton back in the suit of Batman 33 years... 9 For the first time, the advertising revenues of Google... 10 The european car market is expected to undergo a historic...