Christie's withdrew from auction 4 antiques suspected to have been looted

The auction house Christie's would she have been taken advantage of? This is affirmed in any case, Christos Tsirogiannis, a professor at the Institute of advan 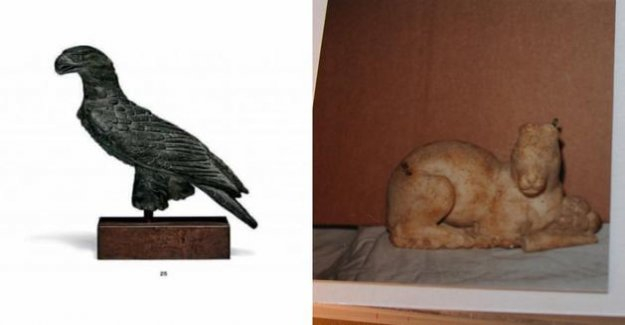 The auction house Christie's would she have been taken advantage of? This is affirmed in any case, Christos Tsirogiannis, a professor at the Institute of advanced studies Aarhus, in Denmark. According to him, several parts removed this month in the online catalogue of the prestigious auction house arising from trafficking of antiquities.

read also : Christie's, Sotheby's, Artcurial... What is the future of auction sales of jewelry ?

The four consignments, works dating from the Rome and Greece of antiquity, were part of a sale organised by the company and ending on the 16 June. Among them, a hare marble roman eagle, roman bronze and two vases attic... which Christos Tsirogiannis did not take long to establish the link with traffickers of art, reports The Guardian .

Removal of the catalog without explanation

Former archaeologist at the University of Cambridge, the professor of Greek had access in the early 2000s, in the context of his research, to tens of thousands of images and archives seized by the police of individuals involved in networks of illicit trade. These included photographs and documents of Gianfranco Becchina, who was sentenced in Greece for illegal trafficking of antiquities.

What, therefore, was his surprise to discover in the catalog of Christie's four of these objects passed between the hands of Becchina. "The hare is represented in the archives of Becchina with his ears broken, but at least one of them lies in front of the sculpture," says Christos Tsirogiannis in the british newspaper, inferring that a work dating from the Second or Third century after J-.C. has been subsequently restored. Another index has also been put on the trail of the trafficker. According to a documentation of Becchina, the latter would have bought the hare for for 13,000 Italian lire to a safe the name of Tullio in 1987, "what is prior to the date of origin given by Christie's".

read also : The egyptian government considers illegal the sale of a masterpiece of ancient

In the brochure of the auction house, Tsirogiannis has also recognized the eagle roman bronze, dating from the Second or Third century, as an object drawn from the archives of Becchina. As well as a pélikè (a kind of amphora) to 430-420 bc, and a cup of 540-530 bc Like to support the remarks of the professor, Christie's has subsequently quickly removed the four objects of its on-line catalogue, without explanation. The hare roman, listed under the lot number 49, has disappeared, and the lot 48 is now directly followed by the batch of 50.

The house was aware of the dubious origin of his plays from ancient times? Nothing allows us to affirm. A spokesman for Christie's said that the parcels had been withdrawn from the auction "as a result of new information provided by the competent authorities from archives that are currently not available to our researchers," noting that "the number of lots affected by such situations remains very low".

read also : Colombia to suspend a sale at Christie's

But for Christos Tsirogiannis, the auction house had the means to verify the origin of these antiquities looted, by sending, for example, the photographs of the works concerned authorities and the Italian or Greek. "They would have found these objects represented in the archives before drawing up their catalogue", he says.

According to him, it is common that the major auction houses and art dealers fail to establish if some of the works come from looting in their country of origin. "These companies promote due diligence and transparency - while, in practice, it is exactly the opposite."

The editorial team conseilleÉvénement : Christie's auctioned the largest pure diamond ever sold in lignePendant the containment, Facebook becomes center of illegal trade in antiquitésL'Germany, a hub of trafficking of antiquities according to a rapportSujetsChristie'sVentes to enchèrestraficAntiquitésAucun comment

1 A state of emergency in Hungary: Orban is Corona-special... 2 Didier Guillaume: a european conference on food sovereignty... 3 Leipzig national players: million-Transfer from Werner... 4 Frankfurter handball club: Collberg is a lion 5 Emergency in Corona times: First help at a distance 6 Suspect arrested: man killed in Regensburg on the... 7 Alone Together, the concert of Jean-Michel Jarre for... 8 Soprano, Cabrel, Angela... That have listened to the... 9 Requiem for Wolf Music, an institution in the musical... 10 The French music accuses 4.5 billion euros in losses... A state of emergency in Hungary: Orban is Corona-special...