HBO Max was launched in Spain in October 2021. In its catalog you can find the latest premieres of HBO and DC Comics, among other brands of WarnerMedia, but als HBO Max was launched in Spain in October 2021. In its catalog you can find the latest premieres of HBO and DC Comics, among other brands of WarnerMedia, but also numerous classic series that are available fully on the 'Streaming' platform. Below you can find a selection of fictions that the company offers and you can not miss if you did not see them at your time on television.

Josiah Bartlet (Martin Sheen) is the president of the United States in this drama who shows the work of the workers of the White House on his day to day. The production created by Aaron Sorkin (The Newsroom) won a total of 26 Emmy Awards throughout its seven seasons, issued between 1999 and 2006.

Ryan (Ben McKenzie) is a problematic young man who will live with a wealthy family, the Cohen, in Orange County. This is the starting point of the popular adolescent fiction that presented characters like Seth (Adam Brody), Marissa (Mischa Barton) and Summer (Rachel Bilson). The US chain Fox offered this title between 2003 and 2007, adding a total of four seasons.

Will Smith became a whole star thanks to this comedy that NBC issued between 1990 and 1996. The protagonist of fiction is a young man who leaves the streets of Philadelphia and is going to live with his rich guys to the luxurious Bel-Air neighborhood , in Los Angeles. The arrival of it trains the life of the Banks family. The six seasons of the series can be found in HBO max, as well as the special in which the distribution is reunited to celebrate its 20th anniversary.

Rachel (Jennifer Aniston), Monica (Courteney Cox), Phoebe (Lisa Kudrow), Ross (David Schwimmer), Chandler (Matthew Perry) and Joey (Matt Leblanc) became the friends of millions of spectators around the world. The series on the lives of young people in New York was a phenomenon and is considered one of the best sitcoms in history. HBO Max has its catalog with its 10 seasons, issued between 1994 and 2004, and with the special in which its protagonists, Friends: The Reunion are reunited.

Lucas (Chad Michael Murray) and Nathan (James Lafferty) are two guys who live in a small American town and seem to have nothing in common, but they are children of the same father. After growing in very different circumstances, their destinations are crossed. This series focused on a group of adolescents and their families was issued between 2003 and 2012, reaching the nine seasons.

1 Texas Synagogue hostage-taker stayed in shelters around... 2 As tensions between the US and Russia escalate, Blinken... 3 U.S. states split on nuclear as they race to reduce... 4 As the Senate opens voting bill debate, Sinema and... 5 The US will fight wildfires where forests and neighborhoods... 6 Julius Erving, also known as Dr. J, speaks about NBA... 7 After hamsters receive COVID-19, Hong Kong will kill... 8 One takeaway from Biden Year 1: Great ambitions, humble... 9 EXPLAINER - Why 5G is threatening to disrupt travel... 10 In a playoff rout, Stafford leads Rams past Cardinals... 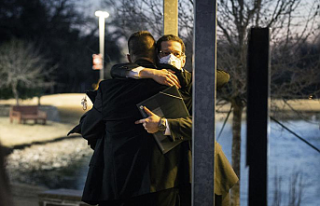