Free trade : the agreement with Mexico that is of concern to the French farmers

The minister of Agriculture, Didier Guillaume, announced on Thursday, June 18, the organization of a european conference on food sovereignty at the back. In rec 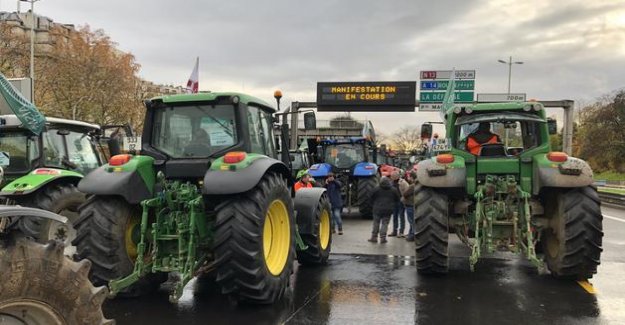 The minister of Agriculture, Didier Guillaume, announced on Thursday, June 18, the organization of a european conference on food sovereignty at the back. In recent weeks, the executive has repeatedly praised the patriotism of food.

"It is important to buy French", it was explained, for example, Didier Guillaume, 3 June. "Delegate our power, our protection, our ability to heal, our lives, and at the bottom, to others, is a madness", had declared himself the president of the Republic, Emmanuel Macron, in his speech to the French on the 12th of march.

read also : Relocation : what activities should we do back in France, and how ?

Despite these expressions of support, the French farmers are worried. In question ? A european agreement of free trade. At the end of April, in the midst of the epidemic of coronavirus, the european Commission has finalised the last details of a new trade agreement with Mexico.

On the website of the european Commission, this agreement is presented in a very positive way. "The new agreement will eliminate customs duties on most of the latest goods on which Mexico still viewed, in this case almost exclusively of food products and beverages. This will be done in the seven years of the implementation of the agreement", we read. "Through this new agreement, the EU will be able to export products that sell very well outside of Europe," says the text, citing the poultry, cheese, pork, chocolate and pasta.

French farmers, themselves, are very far from sharing the enthusiasm of the Commission. As early as 29 April, in a press release, the national association of interprofessional livestock and meat (Interbev) about : "The european Commission has just finalised, this Tuesday, 28 April, a trade agreement, modernized with Mexico to open the eu market to beef from mexico, to the tune of 20,000 tons per year, to 7.5% customs duty. And this, while the beef in mexico, which do not present sufficient guarantees on the health plan, were until now excluded trade between the EU and Mexico". The association called Emmanuel Macron to "oppose the new EU-Mexico agreement" and "block any negotiations on the opening of the eu market of new volumes of beef from third countries".

"We expect that France and Europe are now in the consistency of their actions with their speech, to protect us from the unfair competition of imported meats and allow us to continue our mission nurturing of the country", stated the chairman for Interbev Dominique Langlois, in this press release.

Contacted by Le Figaro, several agricultural unions to detail the reasons of their hostility to this agreement. "It was a big impression of a piss-take, we made a beautiful speech about the fact of relocating, and 15 days after we learn that the agreement is finalized, thrashes Denis Perreau, national secretary of the Confédération paysanne. "We are not against international trade, but against the bilateral agreements, where agriculture is sold, and serves as a currency of exchange. This agreement does not take place to be," says Aurélien Clavel, vice-president of the union of Young Farmers (JA).

The unions say including the unfair competition. "The production costs of mexican are equivalent to 47% of the costs of production in French," recalls Denis Perreau. According to farmers, the european market will be "flooded by meat little dear who does not comply with the european standards".

"there is no way to control the products imported, on the production standards, the use of plant protection products or animal well-being", explains Aurélien Clavel. "Today, Mexicans do not make meat without hormone. To feed their cows, they have a right to the animal meal, whereas in France it has been banned since the mad cow crisis. They do not have the same standards as our home," said Denis Perreau.

Ratification in the French Parliament

The agreement between the european Union and Mexico must still be submitted to the Council and the european Parliament for signature, as detailed in the website of the european Commission. It must also be ratified by the French Parliament. For the time being, the date of the vote in france has not yet been set. "It will never be voted in the current circumstances," says the Figaro mp LREM Jean-Baptiste Moreau.

Contacted several times on the content of the agreement and the timing of the vote, the ministry of Agriculture has not responded to our requests. Interviewed on June 3, on South Radio, Didier Guillaume believed, however, that this agreement had been made to "season". "It will be subject to ratification, but now is not the time to ratify this kind of exchange (...) It must be an exception food, you don't exchange food for cars", he added.

Remains to be seen whether this agreement will experience the same fate as the free trade agreement between the european Union and Canada (Ceta), which has still not been ratified by France.... but applies provisionally for almost 3 years. "The agreement must pass in front of the Parliament of each country but there are likely to be in service before the country have enabled", feared Denis Perreau.

there will be the train to Uzbekistan, which will not be spent on the body of French agriculture.

The other countries in the EU (Allemagbe, Italy,netherlands...) are all or almost all are very excedentaires in their trade balance.
They will support always the free-trade agreements. For these countries the industrieencore strong agriculture is a currency exchange Only France is losing and if she doesn't want to ruin it has to adapt by becoming more competitive, by reducing its welfare state, or out of the EU.

The EU is incorrigible. The tourism food products (and its disastrous carbon footprint) it is his dada.

1 Heart leaf-stories: Tender times with Bummi 2 Due to Corona-crisis: IG Metall: 150,000 jobs threatened 3 Researchers unravel mystery: What is the thing from... 4 44. Days of the literature: the Bachmann prize for... 5 Stuttgart in the second League: The explosive rise... 6 Mayor on rampage: it is a sad Sunday for Stuttgart 7 Emotions in the democracy: Is Germany still governable? 8 Darmstadt in the second League: A question of money 9 Transport in the île de france : It is necessary... 10 Relocation to Poland: VW commercial vehicles is to...