It is a setback for Facebook, which is thought to be safe from a decision of the authority of the German competition on the data that he collects on its users. It is a setback for Facebook, which is thought to be safe from a decision of the authority of the German competition on the data that he collects on its users. This decision, which aims in particular to prevent the social network to combine the data it collects directly about its services and those of third party publishers, has finally been validated by the German federal Court.

"there is no serious doubt as to the dominant position of Facebook on the German market for social networks," noted the Court, which considers that the social network about the abuse of the latter by taking abuse the personal data of its users. They have no other choice but to allow Facebook to monitor their online activity if they wish to use its services. "Facebook must give users the possibility to keep these information for them," said the president of the Court, Peter Meier-Beck.

The latter insists more on the data collected by Facebook outside of the social network, in particular by the use of the buttons "I like" integrated on the web pages and tracking pixels, which follow the activity of users on the sites they visit without them knowing. A ubiquity and a lack of consent that allows the German constitutional Court to invoke both the antitrust law and the general regulation on data protection, which regulates in Europe the way in which these have to be collected.

Not tracking without consent

"private data is a major instrument of the economic power and the place on the market of the Internet. When data are collected illegally, an intervention of the competition authority should be possible," insisted the boss of the authority of the German competition Andreas Mundt. The latter will now be able to ask Facebook to stop integration of these data to the advertising tools that it sells to advertisers without the permission of their owners. A hard blow for the social network, which pulls the vast majority of its profits from advertising.

But this will not happen immediately, since Facebook will have several months to comply with the orders of the Authority. In addition, the company believes to be in the right and hope to win, by any means that they has not specified. "There will be no change in the immediate future for the people and companies that use our tools in Germany, has responded to Facebook following the rendering of this decision. We refute any accusation of abuse of a dominant position, and will continue to defend this position."

Facebook is not the only giant of the web to be drawn the ire of european regulators. Last week, the european Commission has opened an investigation into the business practices of Apple. Brussels accused the company of stifling its competitors by maintaining access rules unfairly strict in its application store mobile. According to the Wall Street Journal, Amazon may also be the subject of an antitrust investigation, on how it uses data of the sellers who use its platform to promote its own products. In France, two members of parliament have proposed to tighten the rules of the competition, to better fight against the monopolies of the GAFA.

The editorial team conseilleLa first group action against Facebook in France will be launched in septembreCe that will change the next function to "erase the history" of FacebookCollecte secret data, competition crushed: what reveal the confidential documents of FacebookSujetsFacebookAllemagneConcurrenceaucun comment 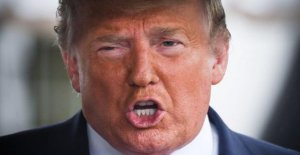 Washington is ready to change the european products...