Hospital : a rise in wages as of July, according to a draft agreement

The general increase in the salaries of the staff, non-medical hospital could take effect as of July 1," according to a draft agreement, of which AFP has obtai 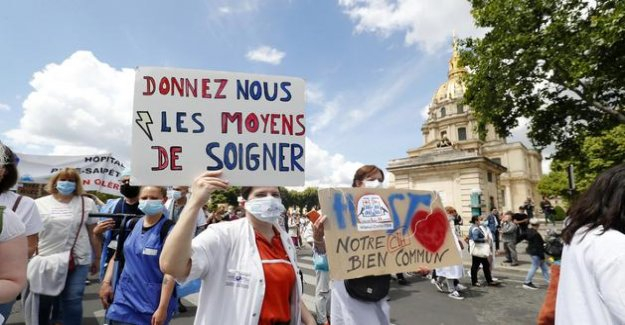 The general increase in the salaries of the staff, non-medical hospital could take effect as of July 1," according to a draft agreement, of which AFP has obtained a copy, which also provides a "renovation" of the premiums, with "a first step by January 1, 2021". The "Ségur health", launched at the end of may, had to go "hard and fast", according to the minister Olivier Véran. For wages, the lines may well move very quickly.

read also : Caregiver anger : "It is necessary to increase the wages, and that they stop close to the hospital!"

The draft agreement discussed Friday between Nicole Notat and the trade unions is based on "a revaluation base as of 1 July" : the million agents of the public hospital service (excluding doctors, who are the subject of a negotiation parallel) would benefit on the effective date of a revaluation identical, whether they are licensees or contractors.

This "new system of remuneration", however, would be "created by a legislative provision included in the draft law of financing social Security by 2021", which will be presented in the fall and voted on at the end of the year, the measure entering into force retroactively.

This general increase would be complemented by an "additional surcharge" for "personal caregivers and medical-technical", for which the maturity date is not specified, and a "revision" of the pay schedules for orderlies and nurses, for which a working group will be set up".

The draft agreement also includes a "project of renovation of the scheme indemnity" officers, non-medical, which has "over a hundred of premiums". They have a "vocation to merge", with a few exceptions (overtime, night work allowance, residence...).

Without setting a deadline, the text indicates that"a first step of implementation will need to be completed by January 1, 2021", to take account of "the end of the rating" in the public service, only to be replaced by an "annual evaluation", paving the way for "the creation of an individual bonus paid once a year."

Are also contemplated by the revaluation of the "first overtime" and "days of replacement volunteers" in order to "limit the use of temporary contracts", as well as the recovery of the amount of the "incentive group" established this year.

see also - Why is there a crisis of vocations in the world nurse?

1 Threatened with disaster in Bundesliga: Werder Bremen... 2 Wiesbaden-in the second League: A question of perspective 3 Darmstadt in the second League: A question of money 4 The operators of the cinema, between enthusiasm and... 5 Columbus without a head: A blow to whom? 6 Football rights sold: German Bundesliga remains at... 7 FC Bayern and his future: Kahn comments on Sané Transfer 8 Frustration at the Team and coach: The Schalke crisis... 9 Group from Frankfurt: parents ' initiative calls for... 10 Less dependence on Oil: Saudi Arabia is investing...