How Dunkirk has set up its bus service free of charge

Dunkirk, impossible to miss. This Thursday is rainy in the beginning of march 2020, the orange bus, yellow, blue, green, pink clash in the grey room. They spend 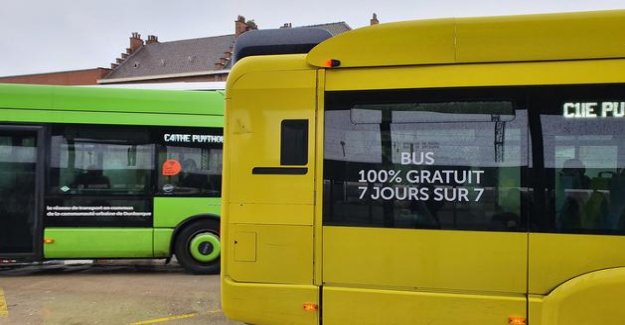 Dunkirk, impossible to miss. This Thursday is rainy in the beginning of march 2020, the orange bus, yellow, blue, green, pink clash in the grey room. They spend all of ten minutes, between 7 a.m. and 1 a.m., Monday to Saturday. As in many cities of France. But on the windows side rear, an inscription calls out : "Bus 100% free, 7 days on 7 ".

read also : Can we still make the public transport free when the coffers are empty ?

mount without a punch ticket, in good standing, bewildered. The here in dunkirk, in turn, are used to it. In September 2018, the network has become completely free for the users of the 17 communes of the agglomeration, thus become the most populated of France (200,000 inhabitants) to have set up this device. A system which, however, is not new. Thirty-five cities, from left to right, the practice already. Some even for 45 years (1975) as Compiègne, in the Oise.

On the occasion of the municipal elections, the free and total or partial appeared in the programs of many candidates. Why is this scheme attractive ? Mainly because it is both eco - friendly- encouraging the population to give priority to transit rather than their car - and social, giving a financial boost to the people. Is this a good measurement ? What are the advantages and disadvantages of this it is free ?

In his grand office of the CUD (Dunkirk urban Community), which overlooks the bassin du Commerce, the mayor of Dunkirk and president of the agglomeration Patrice Vergriete (various left, supported by the presidential party) is inexhaustible on the device. "It is linked to the social emergency and climate. With the free buses, you show people that you can adopt more eco-friendly behaviour without the force, while restoring their purchasing power ", argues that fifty-year-old of 2.02 metres, a specialist in urban planning (and re-elected in the first round).

I sold my car. It is a real gain in purchasing power

Hassina, an inhabitant of Dunkirk

In this city where the car was the queen, and accounted for 66% of the modes of travel in 2015, the public transit use (5% of the trips in 2015) has almost doubled (+85%) one year after the transition to the free bus network in the week and the weekend, according to a survey conducted by the Observatory of the cities of the free transportation. No data was however available on the decline in the modal share of the car in Dunkerque.

"My car spends more and more time in the garage, a testament Didier, 64 years old, young retired here in dunkirk waiting for her bus place Jean Bart, in the city centre. Now every time I have a job in town, to go to the restaurant or to the beach, I take the bus. Like that, no problem to park." "I moved in town and since I travel only by bus," says Hassina, who is a patient at the bus stop before you go to the physiotherapist. I sold my car. I have no more transport costs. It is a real gain in purchasing power," says this middle aged man. They would thus be 10% to be rid of their car or to have waived any purchase, especially among the inhabitants of the city centre.

Of the budget trade-offs

To implement such a measure, Patrice Vergriete, a pen and blank sheet of paper in hand, says not to have increased local taxes or the versement transport (VT, the contribution of local employers who had been raised by his predecessor in 2011). This polytechnician, elected for the first time in 2014 in Dunkirk, rumored to have made trade-offs. In particular, it has removed a draft of the gym, and a performance Arena of 10,000 seats to more than 187 million euros on 37 years to fund the free public transport.

The mayor of Dunkirk boasts other advantages of the device : it has allowed to increase the attendance of its city center. The challenge of many mayors and candidates in the local elections. "The vacancy of trade has increased from 11.5% to 8% in the centre of the historic city, argued the municipal official. And all the empty premises of the centre are projects of recovery, " he says. It should also be said that the shift to free has been accompanied by a renewal of the bus fleet, the creation of new lines, but also significant redevelopment and beautification of the city centre.

For their part, the traders of the centre surveyed, they found that there were more onlookers, have not felt a significant impact on their turnover. "More passing, that's for sure. But people don't buy a lot more bags than before", smiled the saleswoman of a leather which is next to the place Jean Bart. "There has been no impact on the turnover of shops in the city centre ", slice Eric Glucksman, chairman of the traders of Dunkerque centre (60 members / 150 businesses). "My clients can more easily return to the bus and to return a second or third glass, enjoys, for his part, patron of the Palais Jean Bart, a café that overlooks the square. The more there are, the better it is !" lance-t-he in the middle of its regulars.

Broadly acclaimed by the population and a part of the traders, this free is a political success : 98% brand awareness and 93 per cent satisfaction", and welcomes the patron of the community of agglomerations. So much so that none of its opponents in the local elections (in the first round) was given the measure in question. Indeed, rare are the new mayors to return to it. According to the Observatory of free Transport, when a political change occurs, the gratuity shall not be questioned, because it is "a public policy that is eminently popular, and difficult opt-out option for a new elected".

An offer which is not applicable everywhere

In France, some thirty cities offer a bus service free of charge. Generally, these are cities where the public transport network was not very developed and where the population moves around mostly by car. These communities have been able to pass this recipe linked to ticketing, without weighing too in their finances. To Dunkirk, or to Niort, the revenue users accounted for about 10% of the transport budget overall before moving to the free. While on large networks, such as Paris or Lyon, the revenue related to the securities of transportation are rather of the order of 30% of the overall budget. The networks which are passed to the free were not saturated as in the city of paris or lyon.

The editorial team conseilleLe Luxembourg becomes the first country in the world to make its transport gratuitsGratuité transport: why the big cities are pensentSujetsDunkerquetransports in communmobilitéAucun comment

1 Feast of music: Franck Riester considers that the... 2 Seriously Herzfelds discovery: The once was a king,... 3 Amazing discovery: Huge shafts near Stonehenge found 4 The death of Claus Biederstaedt: A came through 5 Poland between the Virus and the election: As if someone... 6 Before the American election campaign: the withdrawal... 7 Balance sheet scandal: Wirecard's share price falls... 8 German EU presidency: a new momentum in the direction... 9 The rescue plan could burst: clarity for Lufthansa 10 Daimler works Council: The pressure is enormous and... 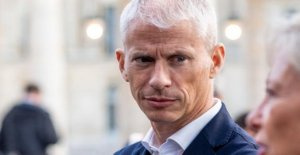 Feast of music: Franck Riester considers that the...