How to block commercial calls on your mobile phone

Commercial calls at siesta's time are something as classic as nap itself. These interrupted the necessary head to offer some type of offer, which improved ou Commercial calls at siesta's time are something as classic as nap itself. These interrupted the necessary head to offer some type of offer, which improved our present contract of light or the Internet. When you depend less on the fixed phone and more mobile, this kind of interruptions or 'cold' calls (that is, without knowing the recipient), begin to be more invasive, arriving at the smartphone at any time, working, during breaks.

The technique is to be persistent and try to convince for the sale, so they will insist on calling without a measure. According to a study by Truecaller, Spain is the fifth country in the world in terms of commercial calls that are received by user, with an average of 18 per month. Although some people follow the tactic of not taking the phone if the name does not appear on the agenda, this can make them, job calls or similar opportunities, stay in oblivion.

Before the smartphones, users could sign up for the Robinson list, expressing that they do not want to be contacted by any company, for commercial offers, through the phone, mail or letter. Although organizations are obliged to consult this list before contacting, on many occasions this does not happen, so it is the user who has to put land by means.

One of the simplest solutions is to block the number that has previously been contacted for commercial purposes. If you have Android, just access the call history, select the number and click on block or dial as spam. In iOS, you are accessed from the Recent phone call tab of the phone or from Contacts. The procedure is the same, dial the number and in information, press Block this contact. The problem is that, in the callcenter, there are a multitude of different phones so the chances of being called from the same one that you have blocked, are very few.

Some mobiles like those who have MIUI, have a native application Simpler Dialer, which accesses the history of other users and is able to solve the mystery of the author of calls (even if they are not commercial). In this way you will surely not be happening from a communication that perhaps it was important.

Google has a tool similar to the one that MIUI offers, an option that is activated by default from version 6.0 of Android. The terminal authorizes the system to send incoming calls to the company's servers, where they are compiled with the spam linen database. In this way, the phone can indicate if this is for commercial purposes before you decrove.

Another way, quite radical, is to block calls from all phone that you do not have on the agenda. To activate it, you see the Phone Application, access the menu by pressing three points, mark locked settings and number and select unknown.

There are applications that replicate the previous processes. These have a database that complies at the time when a call is entered, in order to identify the author. There are several options available, both for iPhone and for Android. One of the best is Truecaller, which is also free. Once we grant the permissions, these applications identify the authors of the calls that have already been marked as spam previously, preventing them from being done on your phone.

The case of Google's pixel mobile phones option is a 'Rare Avis'. Google on your phones presents a solution that could become the final future of interruptions, an evolved function of the answering machine, which goes beyond. When the call is received, a button appears on the screen, then when pressed, the Google wizard will respond by the user, through a locution.

This is the name of the person who makes the call and the reason for communication, and then pass a message with the transcription of the spoken, as if it were a virtual secretary. In addition, it allows you to customize the communications, adding the question about whether the call is urgent or specified that it is busy and the call will be returned later. 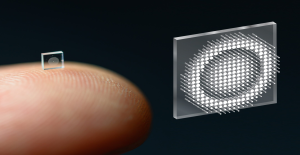 This camera size camera takes pictures like a mobile