No matter your training, your age or your skills. You can contribute to the investigation against cancer progress. And what is better yet, you can do it pla 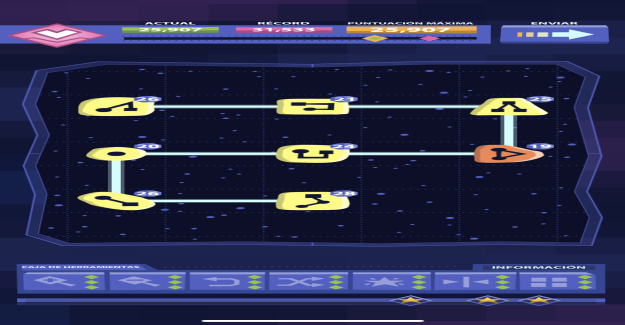 No matter your training, your age or your skills. You can contribute to the investigation against cancer progress. And what is better yet, you can do it playing with the mobile.

A team of the genomic regulation center (CRG) and the National Genomic Analysis Center (CNAG-CRG) of Barcelona has just launched Genigma, a free video game that not only provides the player entertainment or fun. Solving the puzzles proposed also serves to update the genomic cancer information.

Thanks to the herd intelligence, the logic and skill of those who play the videogame, his creators hope to have maps of the reference genome much more accurate than the current ones, something fundamental for the interpretation of studies with cell lines. "The lack of reference maps of the genome limits the current scientific progress. It's like asking someone to guide you in a current city with maps of the past, "says Marc Martí-Renom, ICREA researcher and head of the structural genomics group of CNAG-CRG. Currently, continues, those who work, for example, with the T-47D breast cancer cell line use a standard reference map, Quene is faithful to reality. It is necessary to draw a better plane, placing in it all alterations in the genomic sequences that are associated with cancer.

Researchers may have resorted to artificial intelligence to achieve this goal, but believe that data generated by people can be a more useful tool. "We believe that human logic will provide more creative, more diverse solutions," says Martí-Renom. "The algorithms follow a rules that we impose, move by the same paths, while players do not follow any rule. Everyone will do what you think you have to do with the puzzle, which is very interesting and we believe that you can provide very valuable information », the researcher continues, who remembers that the data obtained by this route will be evaluated later and will be compared with the They throw artificial intelligence projects.

The objective of the game is to resolve puzzles composed of block chains with different shapes and colors. Each string represents a genetic sequence and the way the blocks - DNAframes are placed - is a potential solution for its spatial position in the genome.

The player must reorganize the blocks, whose color and score is changing depending on their location. "We have calculated that when at least 40 players provide the same solution with the maximum score, that solution will be considered the best possible," says the researcher.

In order for the volume of data sufficient and the probability of finding the correct sequences for each location is needed, at least 30,000 players who play a minimum of 50 games are needed. And the goal of creators is to achieve this milestone before the end of April 2022. In total, 1,200,000 puzzle solutions are needed to achieve a detailed map of breast cancer genome, the first of the cell lines that will address the Video game, the creators explain.

The first puzzles that the videogame proposes are those of chromosome 17, "the chromosome that has more genes associated with breast cancer, such as BRCA1 or BRCA2," says Martí-Renom. On Mondays of each week, the team will introduce new fragments of the genome in the video game, which will also provide players with information about what they are doing from a biology point of view.

The researchers trust that the logic and skills of this citizen research team that hope to train people from all over the world will mark a turning point.

The game is available for free on the IOS and Android platforms in Spanish, Catalan, English and Italian.

1 The turn of the ECB puts pressure on risk premium:... 2 Naturgy raises its profits to 1,214 million in 2021,... 3 Alana Haim, protagonist of 'liquorice pizza' and daughter... 4 Egypt accuses an employer to abuse orphanage girls... 5 The rates of his 50th birthday that will not have... 6 Covid today, last hour live | Discover the mechanism... 7 Esther López, tragic end after 25 days of anguished... 8 How much does an online real estate charges for selling... 9 Amazon duplicates its benefits to close the year 10 The Sanremo Festival Long The turn of the ECB puts pressure on risk premium:...