India-China : countries with the nuclear bomb, are already in the war

body-to-body on the roof of the world attends her in birth there to a nuclear war ? Embassies are on the alert since that one incident border on Monday 15 June 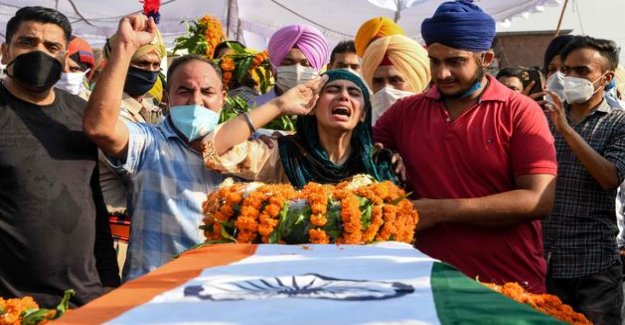 body-to-body on the roof of the world attends her in birth there to a nuclear war ? Embassies are on the alert since that one incident border on Monday 15 June in the disputed region of Ladakh, in the Himalayas, has resulted in the brutal death of tens of indian soldiers and chinese. If acts of relief seems for the time being rule out the possibility of an escalation, tensions remain bright between the two giants, each with a nuclear arsenal accordingly. This situation high-risk however, it is unprecedented in the History : twice in the Twentieth century, countries with the atomic bomb have been at war.

read also : Dangerous escalation in sino-indian on the roof of the world

1969 : the USSR and China had a close brush with nuclear war

The border war of 1969 between China and the USSR was seen to burst at the great day the rivalry between the two countries for the leadership within the communist bloc. Its roots are diverse : first, an opposition to Mao's policy of détente undertaken by the secretary-general of the soviet Leonid Brezhnev, coupled with his questioning of the dogma of marxist-leninist expensive to the Soviets, and from 1964 to the claim by the chinese president swathes of the Far East of russia.

For its part, the USSR was alarmed by the demographic imbalance is staggering both sides of the border, the sino-soviet in the Far East. Fearing a numerical overflow chinese, the soviet leaders massed hundreds of thousands of soldiers, what the Chinese are not slow to see their tour as a threat. Since 1965, the skirmishes are common between the border guards, who often come to the hands.

"The two parties sent soldiers specialists of the body-to-body and the weapons were not used," says Iliyas Sarsembaev in his thesis on the subject in 2005. "The ' use of the weapons was made all the more delicate that the chinese military used a shield of civilians in its advanced beyond the border." The tone changes after the crushing of the Prague spring in 1968 by the Soviets. The Chinese are worried about the propensity of the "Russians" to intervene in the "brother countries" to subdue the ideological differences. To deter Moscow, Mao chooses the demonstration of strength.

march 2, 1969, 32 soviet soldiers are killed during a foray into china on the island Damanski, on the river Ossouri. On march 15, the chinese artillery pounded the soviet forces stationed on the island. Informed late, Brezhnev ordered to respond without further delay. The chinese troops are crushed under the fire of mlrs Grad, who make their baptism of fire. Chinese losses are counted by hundreds.

clashes will continue in the spring and summer of 1969 on other sections of the border, at the initiative of China or the USSR, causing the death of hundreds, even thousands, of soldiers. It takes very little for the conflict turning nuclear confrontation. "The memoirs of the officers of the KGB who served in the Far East at the end of the 60 note that the bombers nuclear-stationed in the area had received orders to be ready to take off at any time," says Iliyas Sarsembaev.

Cut off from the world by the chaos of the cultural Revolution, chinese leaders are almost unreachable. "When soviet premier Alexei Kossyguine trying to reach Mao by phone at the end of march 1969, the red guard who responds to him the insult, the trafficking element of a revisionist, and he hangs up the nose !" said the historian Sergey Radchenko, of the University of Cardiff. "This is only on the occasion of the funeral of Ho Chi Minh, which Kossyguine and the chinese prime minister Zhou Enlai attended in September, as Beijing finally responds to the openings of Moscow, and that a ceasefire can be negotiated a few days later."

a major Turning point of the Cold War, this border conflict will hasten the rapprochement between China and the United States, which will culminate with the visit of Nixon to Beijing in 1972. It will have to wait 30 years to see it again two nuclear powers challenge to cannon shots.

At the heart of the Kashmir, district of Kargil has given its name to a confrontation outside the norms between India and Pakistan, triggered by the infiltration of pakistani troops in the mountainous region administered by New Delhi. "Unlike the confrontation in sino-soviet war of Kargil is taking place in a context of appeasement between Pakistan and India, after an official visit of indian prime minister to Pakistan in February 1999," says Pierre Grosser, historian and professor of international relations at Sciences Po in Paris, who has studied the two conflicts. "It is therefore with surprise that the Indians found in may 1999 that hundreds of fighters paramilitary forces of pakistan have crossed the line of ceasefire in Kashmir."

The response indian mobilizes tens of thousands of soldiers. The ensuing war lasted until July and see the pakistani troops and indian face between 3000 and 5000 feet above sea level, temperatures are often extreme. The atomic threat is in the minds of all, the Pakistan that led to a year earlier, its first nuclear tests. May 31, 1999, the minister of foreign Affairs of pakistan Shamshad Ahmad, says that Pakistan is ready to use "all the present weapons in its arsenal".

Aware of the danger, the China, combined history of Pakistan vis a vis India, refuses to give him the slightest support. The pakistan armed forces quickly find themselves in trouble before the against the indian attack, which leads the prime minister Nawaz Sharif to seek an interview with Bill Clinton. The u.s. president agrees to receive it on July 4, but requires the withdrawal of the paramilitary pakistan in the Kargil, under penalty of reprisals. International pressure grows on the prime minister to give in the weeks that follow.

Pakistan it was readyt to make use of the bomb ? U.s. intelligence would have had wind of the launching of the nuclear arsenal of pakistan. Nawaz Sharif will argue later that general Pervez Musharraf had ordered the preparation of warheads in pakistan without informing it. The interested party contends in his memoirs that the bomb, pakistan was not operational at the time of the conflict in Kargil. "It was still hard to know if it happened near a nuclear crisis or not," says Pierre Grosser. "There was infinitely more channels of communication during this crisis than during the conflict sino-soviet, which has allowed a de-escalation quick with the pressures of the international community on Pakistan."

A space below the nuclear threshold

"The stability offered by nuclear deterrence is paradoxical", analysis, Corentin Brustlein, a specialist in defence issues at the Ifri. "You can see it reappear forms of conflict between two powers each with a capacity of nuclear retaliation , precisely because escalation up the nuclear threshold is a priori excluded by the belligerents", he explains.

read also : Frictions at the border between China and India

There is a space of manoeuvre for wars limited between nuclear powers : in respect of standards implied, to avoid an escalation. "Let's keep however in mind that the war is the realm of chance, of chaos and friction," recalls Corentin Brustlein, according to which the rapidity of the means of existing communication can defuse crises, but also contribute to the worse. "The opinion may lead to the escalation of nationalist call for revenge. Each State has its internal dynamics, its own, by which he may regain overwhelmed."

The editorial team conseilleL'India and Japan bind in the face of the ChineL'India first beneficiary of the EBIT, bank created by the ChineFace to China, Europe seeks to strengthen its links with the JaponSujetsPakistanIndeNucléairegéopolitiquearmementrussiechine7 commentairesLuc Photonle 20/06/2020 to 14:21

In the context of 'gue-war' anti-chinese Uncle Sam, everything is done to try to counter the growth of China.
But hey, the threat of Indian, I doubt that this concern seriously the chinese authorities because of a previous altercation between India and Pakistan, a few months ago, had clearly highlighted the presence of large weaknesses in the military...

india would have had to use the nuclear weapons on the muslim Pakistan and Russia on the Chinese Maoist. We would not have the current problems

1 Controversial tazcolumn: editor-in-chief regrets in... 2 Sharp criticism of Federer: Go skiing! 3 Corona outbreak in Tönnies: healing the flesh wants... 4 Number cul-de-SAC: 0700 at the end of 5 Beyoncé unveils the song surprise Black Parade for... 6 Balance sheet scandal: Moody's upgrades Wirecard to... 7 Closure plans: landlords ECE wants to negotiate with... 8 Corona cases in the slaughterhouse: a Further 40 soldiers... 9 No visit to the stadium: Clemens Tönnies in work... 10 After the retreat of the Americans: Scholz hopes to...