A video editing tool, special effects, a feature that allows you to adjust the movement of his lips to the music, a music library is provided. You are not on th A video editing tool, special effects, a feature that allows you to adjust the movement of his lips to the music, a music library is provided. You are not on the application of micro-videos, TikTok, but on Instagram. The social network, owned by Facebook, has decided to launch in France and Germany, in the form of a full-scale test, a clone of the application in china in the success of micro-videos.

Baptized Reels, it had already been launched in beta version in Brazil last year. It is, according to the official description, "a new experience Instagram gives everyone the ability to create and edit short videos, and be a creator on a world stage". Instagram recognizes that he is looking to compete directly with TikTok. "I think that (Musically (the application acquired by the chinese ByteDance, and then transformed into TikTok, editor's NOTE), even before TikTok, and then TikTok itself, has a lot of merit of having popularized this format," said the product manager of Instagram to the american site TechCrunch.

As TikTok, the videos created can be viewed by all users, if the creator chooses, and not only by its subscribers. And this, even if it has not millions of "followers". A new space is created for the occasion in the Explore tab of the application. If the novelty works, it will be launched also in the United States then proposed to the billion and a half users of Instagram all around the world.

With this new feature, Instagram - which already allowed to shoot and post simple videos - chases of TikTok. It recognizes that the application of micro-videos is a competitor unsafe and that it should offer the same functionality of editing and sharing of videos on Instagram to prevent users from deserting. In the United States, users spend on average 14 hours and 18 minutes on TikTok in march, compared to 5 hours on Instagram, according to Comscore. Instagram seeks so that a fraction at least of this time spent on the application chinese be used in the future on its platform.

A cloud of competitors for TikTok

Consequence of its success, TikTok is facing more and more direct competitors. In addition to Instagram, the american press revealed in April that YouTube was preparing him to be a clone of TikTok, baptized Shorts. The chinese group Kuaishou has attempted to launch its clone Zynn, who offers to pay its users (but the application has been removed from the stores of Google and Apple for having stolen content to TikTok). The creator of Vine has launched Byte. As for the competitor Singapore Likee, it pierces in India and has launched a campaign of massive advertising to conquer the western markets.

TikTok will he resist the Gafa? Snapchat saw its growth slowed down during the three years after Facebook had copied his videos are ephemeral. But ByteDance, the mother house of the application of micro-video, enough to see it coming: its valuation has exceeded $ 100 billion in the spring.

The editorial team conseilleL'competition authority in the uk to suspend the redemption of Giphy by FacebookDeux unicorns china exceed $ 100 billion valorisationTikTok reveals the recipe of its system of recommendations #foryou #pourtoiMauvaise passes for competitors to TikTokByteDance, the chinese who wants to entertain the mondeYouTube prepares its response to TikTokSujetsFacebookRéseaux sociaux2 commentairesShanghai kidle 24/06/2020 at 08:05 am

Good luck to them! This said with a Trump, which distorts competition, it should be the Fair(e)

The degree zero of culture.

1 The New York Times will lay off 68 employees 2 Support Plan for aeronautics : a strange coupling... 3 Interview for Ibiza-affair: Governance has to do in... 4 Resistance against Clemens Tönnies: Schalke is not... 5 A victim of the strikes and the Covid-19, Fauchon... 6 Molières 2020 : a celebration without a public, but... 7 97 Dead in Pakistan: Human error led to plane crash 8 Patent dispute with Nokia: Daimler hopes to have clarification... 9 Now the butcher's talk: Re-on-the-spot battles 10 Turkish state Fund: Erdogan's long Arm in the economy 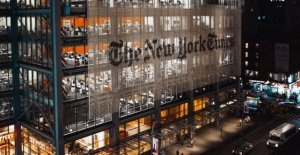 The New York Times will lay off 68 employees