Jordi Miralles: You can die in a more ecological way

In the British Isles there are more than 260 "natural" cemeteries, many of them in the forest, where one can be buried in a carton, wicker or bamboo coffin, o In the British Isles there are more than 260 "natural" cemeteries, many of them in the forest, where one can be buried in a carton, wicker or bamboo coffin, or even in a biodegradable ecological cotton mortise. The "tradition" began in 1993 with the Carlisle Cemetery and it is an increasingly popular option, thanks to the work of The Natural Death Center.

On the other side of the Atlantic, a congress entitled "Life, Death and Green Future" was celebrated recently, driven by the Green Burial Council to disclose the benefits of "natural" burials. The state of Washington was the first to approve two years ago the "natural organic reduction of human remains", and the Métamorphose Foundation abanderates from Belgium the process baptized as "humusing", using composting and permaculture techniques.

In Spain, while, death is still weighing as a slab, the "ecological" options are scarce and deceptive and almost 40% of deaths end up in incineration (we are the country with more crematorium ovens in Europe). Against the gap that exists in our country rebels the biologist and activist Jordi Miralles (Sabadell, 1959) in a book, simplicity and art in the dying (Pàmies Vitae Edicions), reminiscent of entry the anachronistic survival of the Mortuary Health Police Regulation of 1974

"We continue to function with a Francoist legislation and 60% of the population has contracted death insurance created at that time," denounces Miralles, founder of the Catalan Environmental Education Society in 1985 and the Earth Foundation a decade later. "Keeping the taboo of death is the guarantee for profit to persist. And there is no market that changes if the consumer does not empower".

Simplicity in the art of dying is precisely an appeal in favor of a "lighter, humble and aligned death with natural processes." "The first step is to break the taboo," he emphasizes him. "And that is achieved with the disclosure of everything related to the process of dying, in its biological and spiritual dimension."

The restlessness was awakened in 2004, when Greenpeace laden the campaign against the use of tropical wood, and one of the sectors that attacked was that of the manufacturers of coffins. "At that time, a student who was duel was passed through the death of a friendship and offered to investigate in the environmental impact of the funerary process," recalls Jordi. Thus, the monograph of Ecofunerals was born, which in 2011 ended up forging in a project of the same name of the DKV insurance company and the Memora funeral home.

The Catalan biologist followed his search on his own and risk with the Funeralnatural.net website, possibly the greatest compendium of articles and reviews on books that touch the issue of death in all its amplitude.

"Fear of living, fear of dying, fear of suffering ..." Miralles refers to the words of J. Krishnamurti, who speaks of love to nature and in the heart as an antidote to that ancestral fear that in his opinion has He has been used for centuries by religions.

"Now it is done the same with the pandemic, with the attack of the mutant, evil, cotagious and mortal viruses. Funeral rites fulfill an important role in all society, to help heal the duel. That's why during the confinement it was forbidden to participate In them while you could enter without problems in supermarkets. "

Fear, in the opinion of the biologist, is lost with knowledge: "The rays and thunders failed to be frightening when we knew that they were not the anger of God but a simple atmopheric phenomenon. With death, something similar: from understanding why our body breaks down to what happens with experiences close to death (ECM). All the people who have gone through those experiences return full of love, gratitude and with the purpose of helping the rest of human beings to lose fear of Death, to accept that it is only a transit, as is the birth from the belly of the mother to earthly life. "

"Everyone who is dismissed according to his beliefs," suggests Miralles, who cries out of funerals with his own rituals and consciously elected, outside the religious contexts or the unbearable asepsis of tankers: "Why not be able to watch for an hour A coffin in a museum or civic center? "

"In other countries, funeral services adapt to customers, but in Spain it is the client who else to adapt to funerary companies yes or yes," says the author of simplicity and art in the dying, which puts as an example the obstacles to the marketing in our country of cardboard coffins: "The price of the funeral is based mainly on the price of the coffin, and if it is made of wood it can still" be expensive "but cardboard! The business would become ultralucrative to simply reasonable".

"Ecological burials can be substantially less expensive, more respectful with the environment and spiritually earthly, by allowing the return to land in a more natural way," concludes Miralles, which offers in his book tips to minimize the ecological footprint in everything The process, from the transport of the crowd to the floral ornaments, passing through the choice of cinerary urns: biodegradable, biosoluble, with mushroom mycelium or even with substrate to plant trees.

"But no doubt the greatest choice of treatment for organic matter is composting," concludes the biologist. "In two or three months, organic garbage becomes fertile and healthy humus, and the same happens with the human body without life. Now, it is convenient not to confuse composting with decomposition: we are talking about a still recent biotechnology, which Requires oxygen, moisture and diversity of organic materials and microorganisms in an accelerated process. "

Jordi Miralles drinks from countless scientific, spiritual and philosophical sources in his book and finally speaks of dying as "a vital act", along the path of simplicity and detachment traced again by J. Krishnamurti. "In our consumer-capitalist society we attach to belongings and waived to release the unnecessary, as the trees that arise from their leaves in autumn," recovered the biologist. "We have to come back to the vision of nature, to accept that we are part of it and that we must accept their laws, not that of the oligopolios."

1 Talks between Russia and the USA amid tensions surrounding... 2 AP-NORC poll: Inflation up and virus down are the... 3 Djokovic is allowed to stay in Australia, but the... 4 Horror stories of escape from a NYC building that... 5 Many suffer from severe injuries following the 19-year-old... 6 After years of living in Gaza limbo, some Palestinians... 7 Myanmar's Suu Kyi sentenced for 4 More Years... 8 India begins booster shots for the vulnerable during... 9 Dems pivot to fight legislation for voting by invoking... 10 In Kazakhstan, nearly 8,000 people were detained amid... 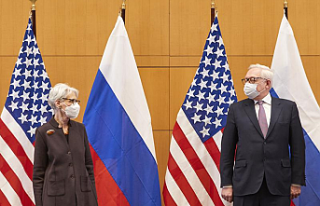 Talks between Russia and the USA amid tensions surrounding...