The holder of the Court of the Contentious-Administrative Number 1 of Ceuta has ordered the suspension of the repatriation of nine minors Moroccan migrants to his country by the shipment chosen by the Ministry of the Interior regarding the provisions of Spanish legislation and the international treaties, paralyzing that has been extended by the administration to the rest of the 700 young people in the same situation.

In his view, "there are enough data to understand that a violation of the right to effective judicial tutela" of children in case of return could have occurred.

"To rise up this measure would be allowed the repatriation of the same; so that to be given an estimatory judgment of the pretension of the plaintiff, it would be absolutely ineffective under having executed a vulnerable administrative decision of a fundamental right, without achieving the pretended amparo When the minor is found in Morocco, "Razona in its resolution.

According to the car, to which Europe has accessed Europe Press, the agreement signed by Spain and Morocco on March 6, 2007, where the State Law was based on the defense of the procedure chosen for expulsions "is not an international treaty", but "a declaration of intentions" that "does not constitute a source of international obligations, nor is it governed by international law."

In addition, the magistrate recalls that in its own articulate it is obliged to "abide by our legal system and the rules of international law, specifically the Convention on the Rights of the Child to proceed with the repatriation of minors."

In his opinion, "it is only possible to carry out such repatriation if it is performed with absolute respect for our legal system", something that has not been done with the Law of Aliens or with the legal protection of the child.

"Does not consist," he has been fulfilled, no information of the affected minors has been fulfilled, "he has not been provided any of the affected minors to be given the data that has determined his repatriation; he does not consist that the start of the repatriation process has been communicated or. to minors; nor to the autonomous city despite taking on this one's guardian, neither the prosecutor's ministry, without any way they can be understood that the procedures required the mere referral to the Prosecutor's Office of the List of Minors that itself Day will be repatriated; and the motivated resolution susceptible to being appendable has not been provided ".

The auto remarks that "one of the essential principles of our order is that laws must be fulfilled in their own terms." "This impliculing that all, including administrations, have the obligation of current standards, without making exceptions not expressly contemplated in the normative text itself," he says.

1 They dismantle a network that captured minors very... 2 Roglic risks and almost loses everything on this round 3 McDonald's runs without smoothies in the United Kingdom... 4 Manuel Castells opens the door to a greater presence... 5 The Premier League takes a pulse to FIFA: Do not give... 6 Laliga plant to FIFA: will support clubs that do not... 7 First and last offer of Real Madrid by Kylian Mbappe:... 8 Fauci: Hospitals are using more anti-bodies treatments 9 In speech on Indo-Pacific vision, Harris criticizes... 10 Paralympics are held in an empty stadium -- much like... 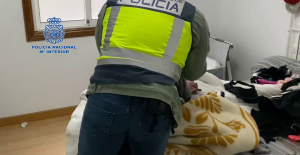 They dismantle a network that captured minors very...