The French President, Emmanuel Macron, spoke on Thursday by telephone with the Australian Prime Minister Scott Morrison, who claimed compensations to restore th The French President, Emmanuel Macron, spoke on Thursday by telephone with the Australian Prime Minister Scott Morrison, who claimed compensations to restore the bilateral relationship after having broken an important submarine purchase contract in September.

The Elysee explained in a statement that Macron, in his first conversation with Morrison after the crisis, reminded him of the "unilateral" character of the Australian decision to end the contract, valued at about 56,000 million euros, and establish a military alliance with United Kingdom and the United States, who will now buy other submarines, this time nuclear.

For the French President, that "broke the relationship of trust" between the two countries and for that reason now corresponds to the Australian Government "propose concrete actions" that demonstrate its willingness to "redefine the bases" of that relationship and continue with the common action in The Indopacific Region.

In addition, he noted that great attention will be given to the situation of the French and Australian companies affected by the end of the Twelve Submarines of Conventional Propulsion, which upon announcing in mid-September opened a diplomatic crisis between France, on the one hand , and Australia and the United States, on the other.

France called on consultations at its ambassadors in both countries, an unprecedented decision in relations with those allies, and although the sent to Washington returned a few days later, Canberra's not returned to the end of several weeks.

The French company of State Naval Group, which was responsible for manufacturing the submarines, has announced that it will present to Australia the invoice of what will have to pay for the expenses that the company and its industrial partners had already done or committed, of Agreement with what stipulated the contract.

On the other hand, Macron took advantage of the telephone interview with Morrison to incite him to adopt "ambitious measures at the height of climate challenge" on the eve of the G20 summit that is celebrated in Rome this weekend and of the COP26 that will take place in Glasgow (United Kingdom) from October 31 to November 12.

Specifically, he asked him to increase the country's contribution to mitigate the effects of global warming, which is committed to stop extracting and use coal in Australia and exporting it, and that strengthens its support for the International Solar Alliance.

Australian Prime Minister, whose country is one of the main producers and global coal exporters, presented a plan on Tuesday to achieve the goal of zero carbon dioxide net emissions for 2050.

But this plan does not contemplate a greater effort to reduce those emissions for 2030 of the expected so far, and contemplates keeping the mines open on that horizon.

1 Biden will travel to Capitol to promote agenda and... 2 AP-NORC poll: Dems and Biden get low marks for spending... 3 Vatican suspends broadcast of live greeting from Biden... 4 Biden announces "historic" deal and asks... 5 Over the years, presidents and popes: Gifts, gaffes... 6 High COVID costs are caused by Eastern Europe's... 7 Prayer for kidnappers is deeply rooted in the faith... 8 Exxon CEO denies spreading misinformation about climate... 9 Secret Story. The House of Secrets, Live | After the... 10 Venezuela wanted to trade Maduro for Americans 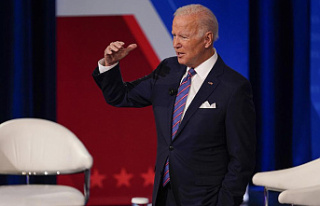 Biden will travel to Capitol to promote agenda and...