María Jesús Montero unauthetorized Escrivá and Puig and rule out creating a tax to Madrid: It is not in government agenda or will it ever be

"It is not on the government's agenda or will it ever be". With these words, the Minister of Finance and Public Function, María Jesús Montero, has ruled ou "It is not on the government's agenda or will it ever be". With these words, the Minister of Finance and Public Function, María Jesús Montero, has ruled out that the Executive is weighing the creation of a tax for the Community of Madrid and thus counteracting the capital effect, an idea for President Valencian, Ximo Puig , and seconded by the Inclusion Minister, José Luis Escrivá, who on Thursday opened the door to study his creation.

A plan, to design a tax for high income that has its tax domicile in the capital of Spain, which has been harshly criticized by the Popular Party, which has accused the PSOE of "Madrileñofobia" and "fiscal persecution" by understanding that The executive aims to punish the autonomies managed by the popular ones.

However, the Minister of Hacienda has stopped the feet of the progress of a thesis, that of the creation of this tax, which considers "counterproductive", whatever the color of the party that proposes it. "I think I've been quite clear," Montero dangled on this matter.

In the eyes of Montero, the fiscal policy that the Executive designs should avoid the "confrontation" between territories, and has attorned for the understanding of autonomies so that no "comparisons" or "grievances" be produced among citizens of different regions of Spain.

The declarations of the Minister of Finance have occurred almost parallel to those expressed by the PSOE spokesman at the Assembly of Madrid, Hana Jalloul, who has also closed the door to the creation of a specific tax to Madrid, at the same time that he has Claimed a "just" territorial funding for all autonomies.

"We are against establishing special taxes for Madrid," said Jalloul, who, simultaneously, has demanded "a fair and equitable tax system" for all communities.

The Socialist spokesman in the Assembly has killed that Minister Escrivá did not refer "specifically" the Community of Madrid with his statements, but he spoke from a "theoretical and not referring to Madrid".

1 Several Spaniards denounce a Calvary during his quarantine... 2 Damián Quintero, silver after losing the final with... 3 Katir, eighth in 5,000, pays the sin of youth 4 The Judge sends to trial Ignacio González for alleged... 5 Alberto Ginés: There are politicians who have not... 6 Messi look at PSG: They do what they want with the... 7 Damián Quintero, a silver against the pressure of... 8 Mo Katir: When I take experience I will be the best 9 Detained three members of a Latin band for participating... 10 California's third largest wildfire, Wildfire... 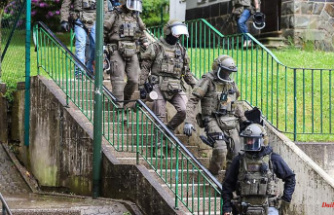 Several Spaniards denounce a Calvary during his quarantine...