Wars, violence, persecution, food insecurity, or climate change : the many reasons that have pushed 79.5 million people to flee their homes or countries by 2019 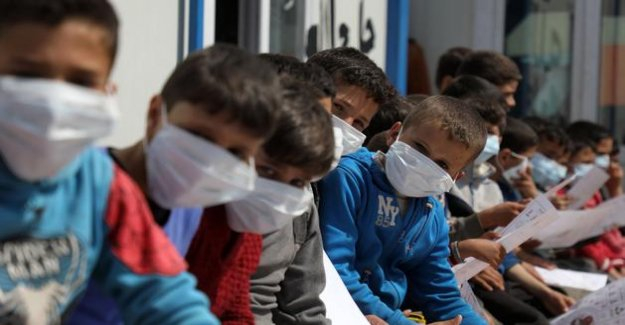 Wars, violence, persecution, food insecurity, or climate change : the many reasons that have pushed 79.5 million people to flee their homes or countries by 2019. It is the finding of the latest annual report of the High Commissioner for refugees united nations (UNHCR), published on Thursday 18 June. This figure steadily increased, even almost doubled in a decade : there were 41 million people were forcibly displaced in 2010. In 2018, they were 70.8 million.

read also : A record of more than 70 million refugees and displaced persons at the end of 2018 in the world

Among these 79.5 million, the UNHCR has 26 million refugees (protected by this statute), 3.6 million of Venezuelans displaced outside of their country (refugees or not), there are 45 million people displaced within their country, and finally 4.2 million asylum seekers. Nearly 80 million, 40% of whom are minors, it is "a sad record" for Céline Schmitt, spokesperson, UNHCR France, since it is also the highest figure ever recorded since 70 years, to the date of the creation of UNHCR.

Of this report, it is also apparent that 80% of the uprooted people are in developing countries (often neighbouring countries), already affected by food insecurity or other risks associated with climate-related disasters, which makes their acceptance all the more difficult.

Turkey is the country that welcomes the largest number of internally displaced persons (3.6 million). Colombia comes in second with 1.8 million people supported (the majority of Venezuelans). This is followed by Pakistan (1.4 million) and Uganda (1.4 million), and Germany (1.1 million).

most of these situations of forced displacement in protracted over several years. Some solutions manage to emerge. Thus, in 2019, only 300,000 people had managed to return to their native land.

How do you explain this steady increase during the past decade ? On the one hand, by the persistence of many unresolved conflicts in various parts of the world.

The conflict in Syria, still ongoing, started in 2011. In Afghanistan, the civil wars, and including international powers follow each other since 1979, leading to incessant population displacements. In southern Sudan, the civil war lasts from 2013 - and after a first civil war lasted from 1983 to 2005). In Burma, the civil war has been raging since the country's independence in 1948 : the central government on successive have consistently, since, of fighting against a myriad of insurgencies, separatist, while other rebellions ethnic erupted in the early 1960s. And endure since.

on the other hand, these conflicts in the long course, have added new crises are more recent, as evidenced by the political and economic crisis in Venezuela, initiated by the death of Hugo Chavez in 2013, which led to the exodus of more than 4 million Venezuelans.

The west african region of the Sahel is undergoing, in recent years, multiple crises are interlinked, combining drought, food crisis, and a general uncertainty related to the terrorist actions of groups, salafi jihadists linked to al-Qaida or the islamic State. Result : the Sahel region of africa today 3.1 million refugees, internally displaced persons, returnees and persons at risk of statelessness. These multiple plagues, is added to the health crisis of the Covid-19, which has aggravated the vulnerability of health, but especially the socio-economic situation of internally displaced persons.

The impact of the Covid-19 on refugees

The UNHCR has strengthened the prevention, access to water, soap, and supported the health systems in countries most at risk : the Sahel, but also in the DRC, in the countries of the horn of Africa, the great lakes region, in Bangladesh, in the neighboring countries of Syria or Yemen. The States have also been encouraged to include refugees in their fight against the virus, in the field of health and social protection.

"The number of refugees reached by the Covid-19 remains for the moment limited to, breath Céline Schmitt. On the other hand, the socio-economic impact is important : in many areas, the refugees who have lost their jobs daily. Many have seen their income decrease, and had to restrict the number of meals taken per day...". The UNHCR has therefore strengthened its programs of humanitarian aid and launched fund-raising appeals, recently in the case of Venezuela, the Sahel and Yemen.

Call for international solidarity and mobilization of various actors

The number of displaced people in the world will he continue, inexorably, to rise and increase the pressure on host countries, already in trouble ? Difficult to predict the future and the outcome of these many conflicts around the world.

solutions are nevertheless recommended by the UNHCR. The global compact on refugees, followed by the world Forum of refugees, in December 2019, has thus put the emphasis on the importance of the mobilization of all actors of society : "for example, work with actors from the private sector on innovative solutions, or with development banks to meet the needs of refugees, internally displaced persons, but also of the hosts who welcome them," stresses Céline Schmitt, who cites the example of the financing of development programmes in terms of access to education for children.

"During the crisis of the Covid-19, we have seen many moose of solidarity, takes the spokesperson for the UNHCR in France. The Covid-19 has shown how much our world was interconnected : to protect a person, all the world had to be protected. It is also this solidarity that we need in order to find solutions for the refugees."

The editorial team conseilleBerlin welcomes refugee children in GrèceUn train to promote the integration of refugees will travel to five cities of FranceSujetsVenezuelaBirmanieSyriehcronumigrantsdemande of asileRéfugiésDemandeurs of asile13 commentairesJhamenle 18/06/2020 15:22

Worst, they fled from the two.wars and climate change...

and if we was talking about the mess that organizes the UN in Africa with countries usa Israel France Turkey going to shish not counting the EU, which imposes quotas of refugees

And how many kids per woman ?
maybe the question of change in religious mentalities and do less of the kids..

1 Familienzoff in the meat group: Corona is Tönnies-armed... 2 Even an American to play Lady Di ? The English gripe... 3 Recent photos of a painting stolen from the Van Gogh... 4 Death of the legendary british singer Vera Lynn, bride... 5 This summer, most of the French who go on holiday... 6 Tights Gerbe saved from bankruptcy by their shareholder... 7 Million lawsuit against Diack: A loss of world-wide... 8 Thomas Müller on the final in 2012: I wrote the other... 9 Victory in Dortmund, Germany: A very, very big day... 10 To dispute top: luck stone-partners Large speed skating...