Orange President and CEO, sentenced to a year in jail for the 400 million scandal of 'Tapie case'

The President and CEO of the Orange Telecommunications Company, Stéphane Richard, has been sentenced to a year of prison and a fine of 50,000 euros for its part The President and CEO of the Orange Telecommunications Company, Stéphane Richard, has been sentenced to a year of prison and a fine of 50,000 euros for its participation in the multi-million dollar scandal of the 'Tapie case', for which it was also condemned the then French Minister of Finance and now Chairperson of the European Central Bank (ECB), Christine Lagarde.

According to the verdict, disseminated to the French press and that collects the newspaper 'Le Monde', the Court of Appeals in charge of the case has annulled a judgment of a lower court that had acquitted the employer. One year's sentence of prison has been issued in suspense, so the manager will not step on jail.

In a statement also spread to the French media, the Orange CEO has argued that accusations of complicity in the embezzlement of public money "are unfounded and are not based on any evidence." In addition, he has advanced that this new verdict will resort.

The mandate as the first executive of Orange by Stéphane Richard expires in mid-2022. Although the Executive had no planned to present himself to re-election, he has left the decision of whether he will continue in office until his mandate exhaust. The French State is the main shareholder of the teleco, with a 22.95% share between the shares in the hands of the State Participation Agency (equivalent to the Spanish SEPI) and BPIFrance (equivalent to the ICO), which accumulate a 13 , 39% and 9.56%, respectively.

The sentence of this Wednesday refers to Richard's participation in the one known as 'Tapie Case'. The case goes back to 1993, when the Bernard Tapie entrepreneur sold adidas to the semipubal bank Lyonnais to join as a minister to the executive then led by François Mitterrand.

In 2008, the Exminnisra Lagarde promoted an arbitration court that was existed with the payment of a compensation of 404 million euros to the employer. Subsequently, Lagarde, already under his position as managing director of the International Monetary Fund (IMF), was convicted of negligence for the performance of it in this case and was ordered to tapy to return the funds.

1 The CNMV asks Andrés Iniesta to be informed before... 2 A judge investigates if the Portobello investment... 3 Hotel overnight stays quadruplicate in October, but... 4 Eight of every 10 children's cookies are not healthy... 5 With what card should you pay during the Black Friday... 6 When is the Black Friday in Zara, El Corte Inglés,... 7 Police loads and incidents at the eighth day of metal... 8 The greatest intervention in history to lower the... 9 The hospitality rejects more restrictive measures... 10 María Neira: After the pandemic, a healthy, green... Cyber Monday 2021: These are the best Chollos in technology you can buy on Amazon 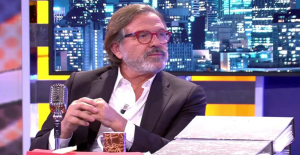 Pepe Navarro: With all certainty, the son of Ivonne Reyes is not mine The CNMV asks Andrés Iniesta to be informed before...