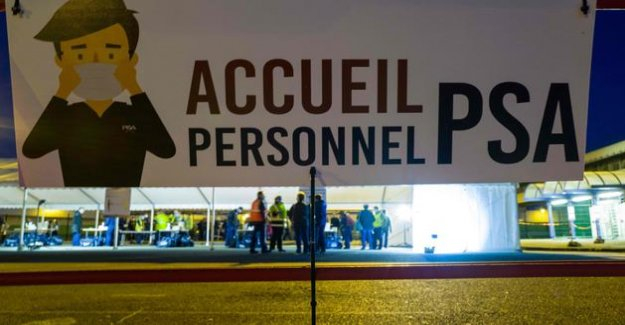 The PSA plant in Hordain (Nord) will host, finally Thursday, 124 employees Polish to strengthen its teams, the majority trade union FO greeting a "great decline" of the division in relation to its initial objectives higher, as the CGT is concerned about.

read also : PSA wants to bring in employees poles rather than temporary workers, the government is opposed to

These employees will enter a third team at the end of approximately 530 people. The direction wished at the start that this team is composed primarily of employees of Polish, which had provoked the ire of trade unions and prompted the government to put pressure on the automaker to review its copy.

This team 'had been initially conceived with a spirit of solidarity by offering an opportunity for employee volunteers to sites that are without any activity to come lend us a hand", explained to AFP Luc Samsoen, director of human resources of the site Hordain, at the end of a CES special on Monday on the site. "It is found that this position has led to a certain emotion, we have heard this emotion and so we worked out an alternative solution", he added.

Finally, this new team will be comprised of 124 employees of the factory in Gliwice (Poland), 235 temporary workers and management research 174 employees in its european plants, but also of acting. The group considers that the proposal of the PSA is well balanced, with more than 95% of local employees (PERMANENT and temporary staff to a workforce of 2000 people) and less than 5 % of the employees of the PSA from other sites on a temporary basis. "All of this is to ultimately manufacture more vehicles in France. In the context of the crisis, it is a good news for our economy," says PSA.

the subject of mobility is of concern to the CGT

The ministers of Labour and of the Economy, Muriel Pénicaud and Bruno Le Maire, had called Friday evening to the PSA "to hire in priority to the interim" and "opt-out" of this project. After a telephone conversation between Bruno Le Maire and the number one PSA Carlos Tavares, the automotive group was finally announced on Saturday that he had backtracked, without providing any quantitative details.

Frederick Jarosset, delegate FO, was hailed Monday as "a large decline in the direction". "What we want is that our temporary workers are taken as a priority and this is what has been done." The topic of mobility between the plants "we worried," but "it is also said that if PSA Hordain were to have any more work, if it is offered to employees to go to work for three or six months in another company instead of having unemployment, it is the best of things, but it is not necessary that it becomes a habit", he said.

A subject that concerns much more the CGT: "PSA wants to ensure that the worker is working where the management has decided. Today, workers in Gliwice in Poland, and tomorrow it will be the workers of PSA Hordain who will be called upon to work on any site in France or in Europe," said Franck Théry, secretary general of the CGT PSA of Hordain.

1 Munich district court: COP confesses dozen times abuse 2 In vain-the Store: Where shopping costs nothing 3 Documentary in the First deposed: ARD tilts controversial... 4 Hanks world: the race of the victims 5 The fight against Corona: the Federal government is... 6 Nuclear safety: ASN warning on the very bad situation... 7 The Champs-Elysées Film Festival, window on a world... 8 Spike Lee does not assume more to have defended his... 9 Criticism of million Deal: RB Leipzig and a Good night... 10 After the Corona onset: investigations against Potsdam...