PSOE, we can and its independence partners approve up to 2% the salaries of Pedro Sánchez and his ministers

PSOE, United We can, ERC, Bildu, PNV, Junts, PDECAT and New Canarias have achieved with their vote to lie down the amendment that demanded the freezing of the g PSOE, United We can, ERC, Bildu, PNV, Junts, PDECAT and New Canarias have achieved with their vote to lie down the amendment that demanded the freezing of the government's president's salary and the ministers to follow the example of the deputies or the assignment he perceives The Royal House, which will remain in both cases without changes compared to last year in accordance with the State Budget Project of the State.

The salary freezing of the members of the Executive has been supported by PP, Vox, citizens, UPN, Asturias Forum, Canarian Coalition and more country and even formations such as Commitments, Teruel exists or the BNG have opted for abstention. Despite this, its votes have not been sufficient against the block of the coalition of government and its nationalist and independence allies.

In this way, finally, and as it collects the public account project for 2022, Pedro Sánchez will see to increase its annual payroll by 2%, that is, the same increase that is foreseen for officials, which means byfend 1,696, 92 euros more. This implies going from the 84,845 euros gross from 2021 to 86,542 for next year. Government members have no extraordinary payments so that Sánchez's gross monthly salary will be 7,212 euros.

In the case of the three vice presidenties, the salary will jump from 79,746 euros per year to 81,341, which will mean a gross monthly retribution of 6,778 euros. The ministers, on the other hand, will charge 6,363 euros per month, which raises its annual gross payroll to 76,355 euros.

1 News today, Wednesday, November 24, 2021 2 Dana: Nine communities continue at risk by snowfall... 3 Boris Johnson calls a crisis meeting after the death... 4 Israel and Morocco sign a historic defense and security... 5 Lin-Manuel Miranda: Hollywood has a pending debt with... 6 Antonio Prieto dies, a sage hidden 7 Top Factors You Should Reflect on When Purchasing... 8 Munger Hall, the most hated building in the world... 9 Jay-Z becomes the most nominated musician in the history... 10 Subway sandwich chain co-founder Peter Buck dies at... 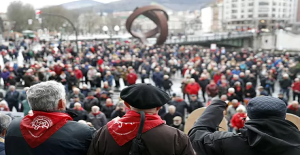