Pablo Iglesias, Ignacio Aguado ... The 'Tertulian cemetery' Spanish is not taken in Europe The list of former politicians that appear in the administration councils of the large Spanish companies can end up being anecdotal before the new phenomenon of "rotating doors". It is about the predilection of former politicians to choose media as a new professional destination when their careers in politics come to an end. Electric network, Enagás or Navantia among others have been replaced by television channels or radio stations. Pablo Iglesias, Carmen Calvo, José Luis Ábalos, José Manuel García Margallo, Susana Díaz or Ignacio Aguado are just some examples.

Undoubtedly one of the most striking cases is that of Pablo Iglesias who has diversified its media profile with collaborations in the newspaper Gara, header newspaper on the Left Abertzale and Ara, Reference Diary of Catalan Independentism. He also participates in the Matinal Gathering of RAC1 and on Monday night in the chain, where he shares a table with Carmen Calvo. On the other hand, he publishes articles for CTXT, where he closes his own media circle. For Verónica Fumanal, President of the Political Communication Association, citizens have to "standardize" the output of politicians to other professions: "When you find yourself without a task and you have to continue paying your bills you have to look for an exit. Yes chips For a law firm or by an ibex35 company is badly seen. It also seems bad for us to be a lot of time in politics or that they go to television. It is a dangerous antipolithic dicoss. "

Pablo Simón, Politologist and Professor of the UCM3, also analyzes this new phenomenon for LOC: "We are seeing the reverse journey to what Spanish politics has lived since 2016. Now they are not the Tertulians who get politicians but they are the Politicians Those who enter the gatherings. In terms of rotating doors, it is a much more neat departure in which the conflict of interest does not seem as direct as if it were something that would touch with your department. "

On the other hand Simon points out some of the conflicts that can be generated as a result of this new trend: "In Europe this type of practices are not common. In this case we speak in addition to politicians who have left behind their responsibilities in the government just two months ago . We do not talk about Marvello or Miguel Sebastián but about Pablo Iglesias and Carmen Calvo. Churches has a real influence on his own organization. There is a possibility, although he has not yet been manifested, that in the gatherings he could give sensitive information that affected To their respective parties ".

In addition, the unknown is added on the remuneration of the new professional activity of politicians. "We do not know much about the caches they charge but it can be intuited that the income is lower than those that are in the private sector. It also depends on the profiles. In most cases they are people who do not have a job To return. Pablo Iglesias did not have a consolidated position in the university to return, he was not a professor. "

José Luis Ábalos or Ignacio Aguado has joined as tertulians of everything is a lie, a program presented by Risto Mejide. There are two other examples of politicians who barely left the ministry and the vice president of the Madrid community respectively, joined the set. Ábalos also remains deputy of the PSOE in Congress, as well as Carmen Calvo. Susana Díaz, former president of Andalusia and now Senator for that autonomous community, also joined the space of Risto. In the programade Ana Rosa there is a political current table in which active politicians participate and that represents a model that is seen in Europe. Gabriel Rufián collaborates with her and precisely had to clarify in her social networks that he did not receive any remuneration on the part of Mediaset. "The tables with politicians are a rule in Europe. Regarding remuneration, it is understood that it is part of its political work, so there is no extra income," says Simon. A Rufián join active politicians such as Rita Maestre or Macarena Olona, classic as Juan Carlos Purse and Ex Politicians such as Rafael Hernando or Antonio Miguel Carmona.

Another quite peculiar possibility and a model that is also not repeated in Europe is that the politician is an interviewer. The two exponents of this genre are Pablo Iglesias and Gabriel Rufián, currently for his interview with Esty Quesada in the factory. Churches also did it on another turn of Tuerka and now he says he comes to do "critical journalism".

1 Round Ivan reappears as Cofrade of the Idiazábal... 2 They accuse Patrick Dempsey to terrorize his companions... 3 Laura Fa Dedawn 'Sálvame' with Gabriel Rufián and... 4 The lava could bury 1,000 houses: If people arrive,... 5 The government figures at 327,129 rejections to vaccinate... 6 Coronavirus today | Two million vaccinated in Spain... 7 The rise of the child Camavinga: Alaba and Benzema... 8 The agony of Koeman: Only the lack of relay delays... 9 The government gives the blow of grace to extensive... 10 Die at 57 years actor Willie Garson, known for his... 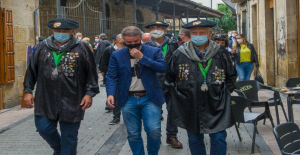 Round Ivan reappears as Cofrade of the Idiazábal...