Two decades ago Paul McCartney (79) began to be interested in organic products and to consider the possibility of cultivating them on his Peasmarsh farm, in Eng Two decades ago Paul McCartney (79) began to be interested in organic products and to consider the possibility of cultivating them on his Peasmarsh farm, in England. Although at first he had to deal with the rejection of local farmers, who were convinced that their fields had been dead, today he has shown that he was not mistaken and that it is possible to establish a crop model without chemical pesticides.

Among the plants that grow on your property, you can find several hemp, which is one of its latest experiments. The famous musician is scrupulously complying with the law, cultivating it with other sowns of rye, peas and wheat, but the biggest challenge that has faced so far has nothing to do with the complicated government regulations, but with its younger neighbors.

"Actually we are starting to cultivate hemp, the most curious with government regulations, is that you have to keep it in a place where people can not see it because all young people come and steal it," he explained in statements to Daily Mirror.

Although technically comes from the same plant that cannabis, hemp has a lower concentration of the thc chemical, the main psychoactive compound of the plant, and is also used to manufacture products such as clothing or soap. In the past, Paul smoked cannabis often after Bob Dylan himself gave him to try this drug for the first time, but he left him a few years ago because he wanted to be a good example for the children and grandchildren of him.

1 Svetlana Krivonogij, the voluptuous cleaner and 'friend'... 2 Carla Bruni suspends her only concert in Spain for... 3 The fortune of Pau Gasol: 200 million in salaries,... 4 Pau Gasol is withdrawn: Who is Catherine McDonnell,... 5 Gloria Camila demands her sister Rocío Carrasco,... 6 The expected return from Malú: I had a lot of desire... 7 Susanna Griso, the ex-husband of Cayetana Álvarez... 8 This is how Alejandro Ruiz, the 'Bill Gates' Marbellí... 9 Volcano in La Palma, last hour live | They increase... 10 Anticipate the civic march for change in Cuba to avoid... 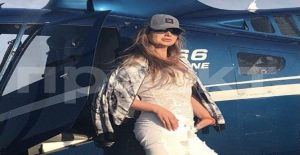