Pedro Sánchez asks for tranquility from the palm: Security is guaranteed

The President of the Government, Pedro Sánchez, has been incorporated this Sunday, around 9:30 (local time), the Meeting of the Steering Committee of the Emerge The President of the Government, Pedro Sánchez, has been incorporated this Sunday, around 9:30 (local time), the Meeting of the Steering Committee of the Emergency Plan for Volcanic Risk of Canarias (pevolca) by the eruption occurred in La Palma.

At the meeting, the president of the Government will know first hand the evolution of volcanic eruption on the island, after which a public declaration is planned.

During a subsequent appearance, Sánchez has guaranteed that the safety of the neighbors of La Palma "is guaranteed". Likewise, the Government president has ensured being very pending "of the fires that may occur". He has also wanted to recognize the work of the Red Cross, firemen and police who are going to add in the coming hours of the emergency military unit (UME).

In addition, Sánchez has said that his "presence compromises the support of the Government of Spain to replenish all the material losses that may occur". "We have all the instruments, all the troops ... The citizens of La Palma have to be calm," he said.

Sánchez has pointed out that the Canary Institutions and the Government of Spain have collaborated in "an anticipation year" for what "could occur" and have also transmitted "public information to citizenship to raise awareness" before eruption.

The President has highlighted the contribution of science because, in his opinion, "once again" the civil protection system has been able to guarantee "an answer" and it has been possible to anticipate as it happened in other phenomena as 'Filomena'. Sánchez has also assured that he has spoken with King Felipe VI during the meeting of the Committee, which he will meet again on Monday.

In a joint appearance with the presidents of the Canary Islands and the Government of Spain, Ángel Víctor Torres and Pedro Sánchez, the Insular Leader has recognized that the progress of lava castings towards the coastal areas, for the material damage it can generate .

"La Palma has shown that it is a safe territory, we were able to respond promptly," he said.

For its part, Torres explained that, at this time, it is not planned to make more evacuations than those that have already been carried out, which have affected some 5,000 people.

Pedro Sánchez has reached the island of La Palma after postponing his trip to New York that was scheduled for this Sunday to intervene at the 76th session of the General Assembly of the United Nations.

"I just arrived at La Palma where I will meet with the Safe Committee of the Insular Cabildo to learn first-hand the evolution of volcanic eruption that are living on the island. Canarias has the support of the Government of Spain to deal with this difficult Situation, "said Sánchez on Twitter.

In addition, different political leaders of different parties have wanted to launch messages of solidarity with the citizens of La Palma after this Sunday has begun an eruption on the Old Summit volcano, in the municipality of El Paso, as reported by the Cabildo of the Island .

The President of the Popular Party, Pablo Married, has shown his concern about what happened through Twitter and has commanded a message of support for those affected by the eruption. "All our support for the neighbors of La Palma, to the competent authorities and the operations, whose indications must be attended for greater security and with the desire that there are no personal injury.

The President of Citizens, Frankadas, has regretted a publication in his Twitter profile that "are moments of great anguish for the citizens of La Palma". "A lot of strength, and thanks to emergency professionals for the work of it," she said.

In this line, the Minister of Social Rights and Agenda 2030 and General Secretary of We Can, Ione Belarra, has transferred its "institutional support and personal affection to the Government of the Canary Islands and to all the citizenship before the increase of volcanic risk in La Palma".

"We appreciate the planning and dedicated and invisible work of all emergency teams," the minister of the 'purple' formation has been aposed.

Before the eruption began, the government's president, Pedro Sánchez, affirmed through a message in his account of the aforementioned social network that is "attentive" to the evolution of the situation on the island of La Palma and that "all Administrations "are prepared to act in a coordinated manner to manage the situation.

In addition, he assured that he is "in contact" with the president of the Canary Islands, Ángel Víctor Torres, who has "the support" of the central government.

The Second Vice President and Minister of Labor and Social Economics, Yolanda Díaz, who has transmitted his support for the leader of the Canarian Executive and his affection for those affected.

The Scientific Committee of the Special Civil Protection Plan and Emergency Attention for Volcanic Risk (pevolca) had recommended this Sunday to the Director Committee of the Plan the preventive evacuation of the population at risk, after verifying that the seismic activity has reached the maximum from the beginning of swarm in the palm.

Based on this information, the Director Committee has decided to begin to evacuate, as a priority, people with reduced mobility in the population nuclei of the stains (the stains below, Jedey, San Nicolás and the paradise), which includes the Municipalities of El Paso and Los Llanos de Aridane; The puddle (Fuencaliente), the bulb (the plains of Aridane and Tazacorte) and the Row and Puerto Naos (the plains of Aridane).

The king maintained a telephone conversation this afternoon with the president of the Canary Islands, Ángel Víctor Torres, to receive information about the situation in La Palma and the evolution of the situation after registered volcanic eruption on Sunday.

This was confirmed by President Canarian on Twitter, where he reported that Felipe VI "reported on the eruption in La Palma and interested in the population".

In the disseminated message points out that the king "follows all events and has moved all his support for the palm tree and special devices activated."

1 A man dies after receiving a beating in the palms... 2 The judge sends prison to the defendant of the macho... 3 Several hoodeds assault the company Giper Gloosines... 4 Multitudinarian concentration in La Coruña by the... 5 Direct | The Socialists García-Page and Lamban join... 6 Close, at the place of the attack on the Casa Barrack... 7 Rescue four boats with almost 200 migrants in Canary... 8 Pablo Iglesias will be the president of the 25m Institute,... 9 The narcos detained in the Mérida anti-drug macrooperation... 10 ERC asks for the refund to the government of the new... 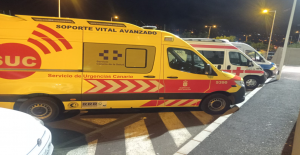 A man dies after receiving a beating in the palms...