Pharaoh Amenhotep I passes through the scanner: A digital autopsy reveals how it was and the age at which he died

Pharaoh Amenhotep I (also known as Amenofi I) has gone through the scanner to find out what aspect he had and to investigate the cause of his death. A mystery 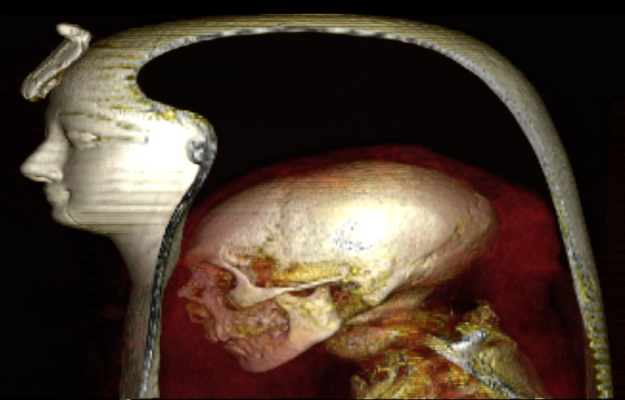 Pharaoh Amenhotep I (also known as Amenofi I) has gone through the scanner to find out what aspect he had and to investigate the cause of his death. A mystery for Egyptologists, who had resisted to develop the mummy of it due to the excellent state of conservation presented 3,500 years after the death of him. The body of her was beautifully decorated with garlands of flowers, and with her face and neck covered by an exquisite funeral mask with inlays of colorful stones.

But thanks to the current imaging techniques, they have not had to spoil the perfect mummification they made to the Egyptian King to study their skeleton. Through computerized axial tomography (CT) they have been able to know the details of their anatomy and make it a digital autopsy, as it details this Tuesday the team that has carried out it in Frontiers in Medicine.

As the authors tell, since this king died, his original burial and his mummy were only open once, in the s. Xi a. C, approximately four centuries after the death of him. The hieroglyphics describe how during the XXI dynasty, the priests restored and went back to bury real mummies of older dynasties to repair the damage caused by tomb thieves. That is, Amenhotep I was buried twice.

The remains of the son of Amosis I were discovered in 1881, along with other real mummies that had become buried, in the archaeological site of Deir El Bahari, an important complex of tombs in southern Egypt.

"The fact that his mummy had not been operated in modern times has been a unique opportunity, not only to study how was mummified and originally buried, but also how it was restored and buried for the second time centuries after his death by the great priests De Ammon, "said Sahar Salem, first author of the study and radiologist of the Egyptian Mummy project.

"Amenhotep I was about 35 when he died. It was approximately 1.69 centimeters, it was circumcised and had a good denture," Saleem resumes. The also Professor of Radiology at the Faculty of Medicine of the University of Cairo has also been able to take some features of his family: "Amenhotep I resembled his father [amosis I]: he had a narrow chin, a small, narrow nose, Curly hair and slightly protruding upper teeth, "he says.

The scanner has also shown that, among the bands with which Pharaoh was involved, he had 30 amulets and a golden strip with golden beads.

Scientists have investigated the cause of their death, but unfortunately they have not found it in its skeleton: "We have not been able to find wounds or areas disfigured by some disease that may indicate the cause of its death, except numerous mutilations performed post mortem, presumably performed By looters of tombs after his first burial. The first mummakers had removed the bowels, but not his brain or his heart. "

Amenhotep I (whose name means 'Amón is satisfied') was the second pharaoh of the XVIII dynasty, and it happened to his father, Amosis I, who expelled the Hicks, reunited the country and inaugurated the Egyptian Empire or Kingdom of Egypt. Preserved documents indicate that Amenhotep I ruled between 1525 and 1504 a. C, and the reign of him was a golden stage for Egypt. A prosperous and peaceful period during which the king undertook military expeditions to Libya and northern Sudan and Ammon was the official God. When he died, both he and the mother of him, Ahmose-Nefertari, were worshiped as gods.

Tutmose I was succeeded, although Egyptologists are not sure of their kinship. Nor do they know if Amenhotep I had children. He married Ahmose-meritamon and although some sources speak that she had a single son who died of a child, in others he affirms that she did not have offspring.

Saher Saleem and the famous Egyptian Zahi Hawass, co-author of this research, have also checked that a hypothesis was wrong. These two specialists thought that the main intention of the tomb restorers of the eleventh century A.C was to reuse the real burial equipment for posterior pharaoons. But the results of their study with scanner have refuted their own theory: "We have shown that at least in the case of Amenhotep I, the priests often repaired the wounds inflicted by the looters of tombs, the mummy restored to return it to its original state And they preserved the magnificent jewelry and amulets, "says Saleem.

More than 40 real mummies of the New Egyptian Empire have been studied within the framework of the Egyptian Antiquity Ministry project launched in 2005. A total of 22 embalmed bodies, including Amenhotep I, were transferred last April to the new museum of Cairo. The face of Amenhotep I's mummy, with her mask, was the icon of the spectacular Golden royal parade (Royal Golden Mummy Parade), which paralyzed the streets of Cairo and gave us an idea of the splendor of the ceremonies of ancient Egypt .

1 Álvarez de Toledo resorts the sanction of 500 euros... 2 HBO Max elimina a Chris Noth del final de And Just... 3 The royal family, without roscón at the house of... 4 The integral nude of Britney Spears with which he... 5 Cristina Pedroche reveals the difficult moment she... 6 This is now Monica van Campen, the model (Spanish)... 7 The unexpected piercing of the Queen Letizia and the... 8 Brigitte Bardot refuses to vaccinate against the Covid:... 9 They find Fraud Fraud to Entrepreneur of Silicon Valley... 10 The painter Chema Rodríguez brings together famous...