the End of the party for the Capitol Hill Autonomous Zone, or CHAZ, the district self-directed Seattle to the United States, where, since 8 June, the police did 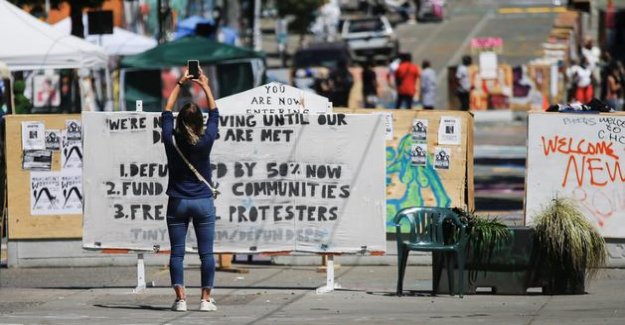 the End of the party for the Capitol Hill Autonomous Zone, or CHAZ, the district self-directed Seattle to the United States, where, since 8 June, the police did more. Monday 22 June, the mayor of the city decided to put an end to this urban experience and social, after two shootings at separate cost the life of a young man of 19 and wounded at least two others.

read also : a tribute from America to George Floyd, erected a martyr of racism

"It is time for everyone to go home, said Jenny Durkan, mayor of Seattle. It is time for us to restore Cal Anderson [a city park] and Capitol Hill so that they can again be a dynamic part of our community. We can always accommodate people who want to peacefully protest, come out there and get together. But the consequences on the business, residents and the community are now too high".

The police should therefore repeat appearance in the neighborhood streets of Capitol Hill. The mayor has promised, without however giving any precise date. There remains the question of the evacuation. The city hall, which fears of violence, has announced that it wants to rely on associations to convince the occupants to leave the area and avoid the violence of a police operation.

Since two weeks, in the wake of the protests against the violence in the police, hundreds of protesters have flocked to the CHAZ, including activists of the extreme left, after the symbols anarchists that we can see on many photos. The neighborhood of Capitol Hill, known in Seattle for its nightlife and its LGBT community, has been the scene of violent clashes between protesters and police after the death of George Floyd, so much so that the mayor of the city had decided to withdraw the police forces to calm the tensions. The city had even provided some logistical support by providing mobile toilets in the area.

little by Little, the neighborhood of six blocks is organized : food distributions have been put in place, as well as the culture of gardens, discussions, or lessons. The district is claimed to be "free of police". Volunteers armed patrolling all the same, responsible for enforcing order in the streets of the CHAZ.

For Raz Simone, the media that american conservatives have rigged the title of "lord of war" of the CHAZ, the idea was more of a rethinking of the police than to abolish it. This rapper wealthy recognized the need to ensure the safety of citizens, but it defends a system of self-monitoring community. A conception of security that is deeply rooted in the american consciousness, which is based on the second amendment of the constitution, which protects the right to carry a weapon and defend oneself.

Only, the city authorities were quick to state violence in the neighborhood : "gunshots, rape, assault, a burglary, an arson, and the destruction of property" listed as well, the chief of police of Seattle, Carmen Best, during the press conference Monday, June 22.

Donald Trump had responded to the situation on Twitter by attacking the management of the crisis by the mayor, a democrat. "Homegrown terrorists have taken Seattle, led by democrats and the radical left, of course. LAW & ORDER!", had it written on the 12th of June. This Tuesday, it twittait that he never would leave an "autonomous zone" has moved to Washington D. C. as he would be president. A tackle in good standing with the democrats in the upcoming presidential elections.

The editorial team conseilleSeattle delivered to the "anarchist" ? Passes weapons between Trump and the elected locauxÉtats united States: the classical music is a "privilege" of Whites and Asians?SujetsGeorge FloydSeattleÉtats-UnisAucun comment

1 Corona-Lockdown: What is allowed in Gütersloh now? 2 South Tyrol wants to save tourism: The Germans are... 3 Pandemic in NRW: Laschet had no choice 4 The shared Bank branch: An Innovation from the Taunus... 5 Eintracht Frankfurt: DFB sports court confirmed Kostic-lock 6 Brose Bamberg: silent City was a Freak 7 Seehofer's announced display: A collective insult? 8 Opening to third countries: the EU is considering,... 9 Committee Advisor affair: Essential insights hidden 10 To disarmament talks: A bilateral nuclear control... Corona-Lockdown: What is allowed in Gütersloh now?