The 200,000 Chinese blood samples that 'hide' the origin of the pandemic of the coronavirus

When the best virus hunters of the world landed in Wuhan on January 14, 2021, there were many expectations about what they would discover at the epicenter of th When the best virus hunters of the world landed in Wuhan on January 14, 2021, there were many expectations about what they would discover at the epicenter of the pandemic. All attention was for these virologists, epidemiologists, veterinarians and food security experts elected by the World Health Organization (WHO) to travel the Huanan market, indicated as a possible zero zone of contagions, visit the controversial laboratory of maximum security That he studied the coronavirus of bat, and interview the first patients and the first doctors who treated the disease.

From that visit to Wuhan came out a report published in March that did not solve virtually no mystery. The predominant theory was maintained that the virus originated in bats, jumped to another animal and mutated in a way that later allowed him to transmit from human to human. The unknown was still the intermediate host, the missing link in the chain of contagions.

These were the conclusions of a 120-page report drafted jointly by a team formed by 17 WHO scientists and another of 17 Chinese scientists. On the last part, that of the laboratory, there were even internal discrepancies within WHO, so much that the director of the body, Tedros ADHANOM GHEBRAYESUS, had to make sure to say that the hypothesis of the laboratory leakage could not be ruled out.

Another of the points that remained unresolved was to know since when the SARS-COV-2 circulated by Wuhan. On December 31, 2019, China informed WHO for the first time of several cases of a "unknown cause pneumonia", although on December 8 is the date on which the Sanitary authorities of the Asian country date the first confirmed contagion. Since the beginning of the pandemic, several scientific reports and journalistic research have been published that indicate the first contagions in the Chinese city at the beginning of November or, even, during the summer of that year.

Experts from around the world, including those of WHO, asked China from the beginning of China to analyze blood donations made during 2019 in Wuhan, collected in the city's blood center. The Chinese authorities have taken more than a year to confirm that they will analyze the samples of blood banks, although they will not give international researchers free access, initially, to the results. In about 200,000 samples, marked by date and location, the key may be. They could contain crucial signs of the first antibodies that help determine when and where the virus crossed for the first time to humans.

Wednesday, during a press conference in Geneva, the Epidemiologist María van Kerkhove, WHO's technical leader on Covid-19, said that studies of blood samples are "absolutely critical" to understand the first days of the pandemic, and Who expects the results, methodology and raw data are shared internationally.

At the same press conference, WHO reported that it has designated a new team from 26 scientists around the world to try to decipher the origins of SARS-COV-2. "All hypotheses must continue to examine, including the possibility of a laboratory leak," said ADHANOM GHEBRAYESUS again. The team stands out the inclusion of Dr. Kathrin Summermatter, an expert in Biosecurity and who has already inspected other high-security laboratories in China, the United States and Russia.

WHO has baptized its new team as a scientific advisory group for the origins of the new pathogens (Sago), of which they are part, in addition to the majority of researchers who were already in the first mission that went to Wuhan, outstanding experts as Christian Drosten, director of the Berlin Institute of Virology; Yungui Yang, from the Peking Institute of Genomics; Jean-Claude Maguerra, from the Institut Pasteur of France; E Inger Damon, disease specialist infections of the centers for the control and prevention of diseases of the United States.

"Avoid that the Sago will recommend more studies in China and potentially elsewhere," Van Kerkhove said. From Geneva, the Chinese ambassador to the UN, Chen Xu, asked that the Sago was not "politicized" and insisted that, given that international teams had already been sent to China twice, "It's time to send teams to other countries" .

In summer, China rejected WHO's demands from new research on the ground. "We will continue to support and participate in international research on the origins of Coronavirus, but we oppose any form of politicization on this issue," said Thursday Zhao Lijian, spokesman for the Chinese Foreign Ministry.

WHO, in an editorial of the journal Science, noted that detailed investigations of the first known and suspected cases in China are still needed before December 2019, including analysis of blood samples stored in Wuhan and retrospective searches of hospital data and mortality. Mike Ryan, the main emergency expert from the health agency, pointed on Wednesday that the new panel of 26 researchers can be the "last chance" to solve the origin of the coronavirus.

1 Volcano in La Palma, last hour live | A new mouth... 2 The incidence goes down to 40 cases per 100,000 inhabitants... 3 Covid or flu: The vaccination campaign and the third... 4 Health only gives primary care 4.4% of what you need... 5 Scientists will be priority staff to access public... 6 US authorizes for the first time the sale of an electronic... 7 China wants to lead a new global pact to protect biodiversity 8 This develops research in anti-Covid treatments 9 The incidence goes down to 41.45 with 42 new deaths 10 Intensive livestock, indicated as one of the causes... 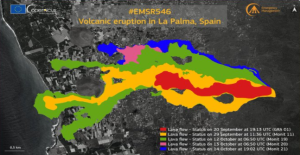