In the Government there is a conviction to exhaust the legislature, the mandate. It is preached that the action is focused on socioeconomic recovery. But do In the Government there is a conviction to exhaust the legislature, the mandate. It is preached that the action is focused on socioeconomic recovery. But do not look forward that 2022 is the airstrip for municipal, autonomous and general elections.

The executive has traced its roadmap for this course: commitment to social and economic measures and parked those that are more controversial and difficult management. For example, the Moncloa is committed to promoting the abolition of prostitution, but the reform of the committed criminal code is frozen to reduce the crimes of sedition and rebellion or changes in the real house to increase its transparency.

"It's not that priority now," says government sources when asked about these two commitments that are now stranded in the drawer. The Council of Ministers has approved on Tuesday the normative annual plan for 2022, which is the reflection of the rules that the Executive, with the permission of its governance partners, wants to promote. Namely, 368 regulatory proposals, of which 92 are laws (11 organic and 81 ordinary) and 276 are real decrees. Almost four out of 10 laws (38.2%) develop commitments from the recovery plan, transformation and resilience (PRTR).

And among them does not appear the reform of the Criminal Code that includes the reduction of the crimes of sedition, rebellion and insults to the crown. At the time, it was one of the great regulatory bets of the Executive, when the Catalan conflict was still boiling and the Government sought how to pilot the relationship with the independence, whose votes were, and they are, keys to governance. It was promised to do so in 2020, to adapt the penalties to European standards, but nor then it was consummated or now it will resume.

Nor is there between the pretensions of the Government, a Law of the Crown, not even reforms to advance the transparency of the Royal House, a purpose that launched the Government President, Pedro Sánchez, at the end of 2020.

Yes there is a block of this normative plan dedicated to democratic regeneration, in which the Government puts the emphasis on measures as the Interest Prevention Act in the public sector, regulating second activities, and the Law of Transparency, with the focus in the regulation of relationships with stakeholders. "There will be no reference to the royal house," said Felix Bolaños, Minister of the Presidency.

"The year 2022 we propose it as an important year in economic recovery, make a second economic transformation in Spain and advance in rights and freedoms. These priorities make us present a roadmap and there are rules that are because they are aligned with these objectives And others that not because they are not, like the reform of the Criminal Code, "explained Bolaños, who emphasized the message he wants to transfer the government:" Economic growth and dignifying the life of citizens ". What does not meet this criterion is excluded from the agenda.

Thus, this year will be the impulse of measures as the housing law; a regulation for equity, universality and cohesion of the National Health System; a social services law; another against racism and other forms of intolerance; a reform of the law of integral protection against gender violence; The Law of Integral Action against Trafficking in Human Beings - in which the PSOE and United we can discuss how to face the abolition of prostitution, as they have different sensitivities; the modification of the sexual health and voluntary interruption of pregnancy; the so-called trans law; o A regulation for the implementation in Spain of the common agricultural policy management system.

Socioeconomic commitment in order to grease the government with the electorate for the electoral cycle.

1 Biden will support filibuster reforms to push the... 2 Djokovic is back in swing in Australia, visa queries... 3 Anthony Fauca denounces Threats of death and that... 4 Return to the wonderful adventures on Saturday afternoons... 5 The pianist dies and composer Barcelona Jordi Sabatés... 6 Iberian press dismisses Fernando Gaea three months... 7 As Afghanistan's crisis grows, the US announces... 8 Georgia ends 41-year title drought by winning 33-18... 9 Special rescues are available to help pet owners who... 10 David Sassoli, President of the European Parliament,... 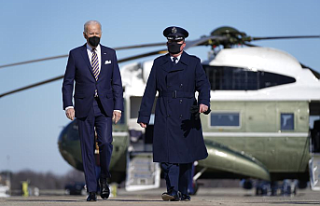 Biden will support filibuster reforms to push the...