British police relate the murder of the conservative deputy David Amess with Islamic terrorism. This was recognized this Saturday Dean Haydon, subcommissionar British police relate the murder of the conservative deputy David Amess with Islamic terrorism. This was recognized this Saturday Dean Haydon, subcommissionary of the SCOTLAND YARD counterter, which assured that the first signs of research reveal "a potential motivation linked to Islamist extremism."

A 25-year-old British and of Somali origin was arrested with the knife still in his hand, after binding more than 12 stabs to the 69-year-old parliamentary veteran during an electoral act in the Methodist Church of Leigh-on-Sea, a small Coastal town at 70 kilometers to this London.

The police have not revealed their identity at the moment or confirmed, as some British media anticipated, if the surveillance list for alleged radicalization came to be. Everything points out that he acted alone and had no accomplices. The agents inspected at least two homes in which he has come to reside in London for the search for evidence. The Mi5 joined the investigation that was rated as a "terrorist incident".

The Premier Boris Johnson and the leader of the Labor Opposition Keir Starmer came together on Saturday morning to Leigh-on-Sea, to deposit flowers in the place where the tragedy occurred. He was accompanied by the secretary of Interior Priti Patel, who made some brief statements at the entrance of the local police station: "We live is an open and democratic society, and we can not let us cow by an individual or for a motivation." "David Amess was a man the people, killed doing the work he loved and while he served the voters of him in the district of him," added Patel. "Acts like this are absolutely wrong, but we can not allow them to interfere in the functioning of democracy."

The Interior Department and the House of the Common have ordered an in-depth review of the security device of the 650 deputies and a reinforcement of protection measures in their electoral districts. The murder in 2016 of Labor Jo Cox, at the hands of the militant of Ultraderecha Thomas Mair, took place also at the exit of an electoral act in his Batley and Spen district.

Even recently in the memory of the deputies, the attack on the Westminster Bridge in March 2017, when a 52-year-old man killed four people and ran over 50 with a car before entering the perimeter of Parliament and stab a policeman.

"No parliamentarian is safe," said the commentator and former conservative Minister David Mellor, a personal friend of Amess, whom he defined as "a charming man" and "a strong thatcherist who for 38 years was sitting on the seats of the Tori party. ".

According to the Guardian, the murderer spent a period not specified in the radicalization prevention program, known as Prevent, but has no significant principles for terrorist activities. The police suspected that he chose as a victim to deputy David Amess awareness and he did not intend to assault anyone else with the knife. For several minutes he remained in the queue of entry to the Methodist Church and when he got him the bloody target he did not try to flee, but he waited for the arrival of the police.

1 They find the corpse of the military disappeared in... 2 Corner 'Low Cost' of ugly fruit in supermarkets and... 3 Felipe Sicily, new spokesman for the PSOE executive 4 The Norwegian police doubt about the conversion to... 5 Dzanan Musa, the child's child who compared with Doncic... 6 Bambino: The wild lovers of Raphael idol 7 The PSOE wants to promote a law to abolish prostitution... 8 Russia surpasses the thousand dead by Covid for the... 9 USA will accept the entry of travelers with a mix... 10 France Take homage to Samuel Paty, the decapitated... 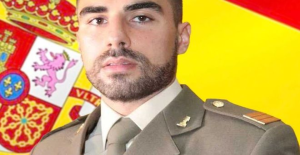 They find the corpse of the military disappeared in...