The police cars disappear from the video game Fortnite

The launch of season 3 of Fortnite, which is expected by nearly 350 million followers, has attracted a lot of surprises. In "Welcome to the waves", the player The launch of season 3 of Fortnite, which is expected by nearly 350 million followers, has attracted a lot of surprises. In "Welcome to the waves", the players may, in particular, develop under the water, riding sharks, or dressing up as the legendary Aquaman. But another change has caused many reactions on forums and social networks: the disappearance of the police cars, which are usually parts of the scenery in the online game.

For the Wall Street Journal , the explanation is all found: studios Epic Games would show their support for the movement Black Lives Matter and the demonstrations against the police violence that have shaken the United States since the killing of the Afro-American George Floyd, on may 25. "This is not a political stance, but rather be sensitive to the issues facing many of our players," says daily, a source close to the studio. The leaders of the company did not want to comment on this subject, but this decision is in response to a dynamic and more global in the world of video games.

Mobilization of the industry of video games

In fact, a few weeks ago, the studios Activision have already made the choice to display that message to the players before each game of Call of Duty: Modern Warfare: "Our community suffers. Systemic inequalities facing our community are again on the front of the stage. Call of Duty and Infinity Ward are advocates of equality and inclusion. We are against racism and the injustices suffered by the black community. As long as this situation continues, we will never become the community that we would like to be". In the same way, GTA Online and Red Dead Online, developed by Rockstar Games, have been made unavailable for two hours, to "honor the memory of George Floyd".

More broadly, the video game industry has also campaigned promising direct donations to associations or by raising funds through special sales. Ubisoft, EA, or Square Enix have announced pay between $ 1 million and $ 100,000 to the NAACP (National Association for the Advancement of Colored People). The website of the online store itch.io has collected more than $ 8 million for the same association in selling hundreds of video games independent at a discounted price.

But this commitment is not to the liking of everyone. Some players regret that the experience in Fortnite is "degraded", others do not hesitate to denounce a position "anti-police" or to assert that the policy should not have its place in the universe of the video game.

1 Calamity, a child of Martha Jane Cannary crowned at... 2 The mayor of Bourges is unworthy of the tag of the... 3 Coronavirus in football: Alarming Numbers in Brazil,... 4 Destruction of the press: the last words of Rezo 5 Goodbye from Bavaria: Benedict XVI on the way back... 6 Redesign of inner cities: Department stores have reached... 7 Drug trafficking on the Internet: the charges against... 8 Frankfurt, Uni-Asta searches: RCDS and Liberals are... 9 A riot in Stuttgart: This inconceivable violence must... 10 Church in Corona times: host home 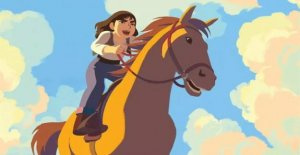 Calamity, a child of Martha Jane Cannary crowned at...