Any aspect of the volcanic eruption of La Palma is awakening a huge interest. Thanks to the satellites of terrestrial observation and the large number of scie 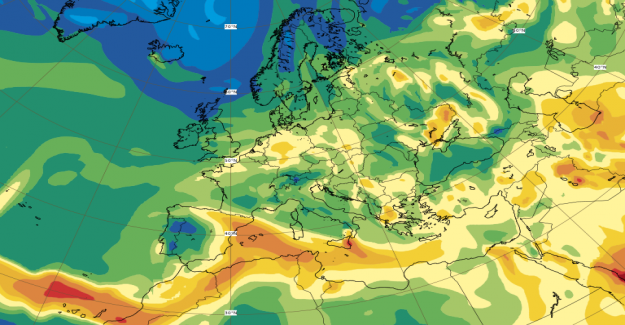 Any aspect of the volcanic eruption of La Palma is awakening a huge interest. Thanks to the satellites of terrestrial observation and the large number of scientific instruments with which the Old Summit is being monitored is being possible to follow its evolution in real time, as well as the trajectory of the volcanic material that expels since last Sunday entered into eruption.

In the last hours, maps have been offered about the displacement of the cloud with volcanic material from the palm, which, according to the estimates made with the satellites of the European Copernicus program, will reach the Iberian Peninsula as of this Wednesday. According to the maps carried out, along Thursday it will be extended by the Levante Zone until reaching practically the whole country on Friday.

The cloud contains remains of particles from the volcano, especially sulfur dioxide (SO2), although in very small amounts so they do not represent a problem for health: "It is very important that we are not alarmists with this," he claims in conversation Telefónica The Meteorologist Francisco Martín, which is currently part of the Meteored team.

"I would not even call him cloud, what is there is a plunk of sulfur dioxide who exped the volcano," he says. As Martin explains, this volcano is not expelling large amounts of CO2 as it did the Icelandic volcano Eyjafjallajökull in 2010, or the Pinatubo, in the Philippines. These volcanoes are eruptive and generated a lot of CO2. The one of the palm is a half-type low and the material that expels is dissolving as it approaches the peninsula, "he says.

From its point of view, "maps can be alarmists because they are integrated into the vertical, from the surface to the troposphere. Seeing them impressive but if the concentrations of sulfur dioxide per meters are analyzed, the quantities are very diluted."

"You have to tell people that it is not true that there is going to be acid rain, as it has been. What is a small concentration of sulfur dioxide that when it comes to the peninsula will be very diluted," he says.

However, "it is not disposable" that this acid rain will occur on Thursday at some points of the most mountainous Canary Islands, according to Rubén del Campo, spokesman for the Meteorology Agency (AEMET).

At the Izana Atmospheric Research Center, located on the island of Tenerife -a 2,371 meters of altitude- The arrival of sulfur dioxide from the eruption in La Palma was detected on Tuesday, with peaks of up to 20 parts per trillion, one Figure that exceeds by 400 times the normal value in the area of the Observatory: "The measured concentration, in any case, does not suppose risk for health because it is a specific measure and being within the range of good quality air according to the index National air quality, "says the meteorologist.

According to the field, the simulations on the evolution of the bulk of the emissions would remain in the eastern part of the palm and in the Atlantic Ocean, although part could reach North Tenerife. As of Thursday they would reach iron and gomera.

In the maps carried out by the Canarian delegation of the AEMET, the prediction is detailed for this Wednesday and tomorrow of the particles and gases issued by the volcano. As they specify, this material moves differently at different levels depending on altitude. At 3,000 meters "it is expected that the trajectory of emissions is northeast" and at 5,000 meters "no significant concentrations of particles are expected."

Each volcano behaves differently and the composition of the gases and particles that emits is also different according to the eruption. Knowing the distribution of volcanic ash and sulfur dioxide during an eruption, the scientists of the Copernicus program stand out, it is important because they can affect human activities, particularly the aviation industry as it first occurred massively with the Eruption of the Eyjafjallajökull, who forced the airspace to close for more than a week, causing enormous economic losses. Without having that scope, other eruptions have caused problems in aviation in specific regions.

"The cloud of volcanic ash is relevant to aviation and for that reason a constant monitoring of the position and evolution of it is carried out, both with the information of the volcanic ash notices center, and with information provided by other agencies, As AEMET's forecasts that can influence their displacement, "explains Laura Garcés, director of the ENAIRE network, the business entity Manager of air navigation in Spain and Western Sahara.

"In the eruption of the Eyjafjallajökull volcano, this same monitoring of the ash cloud was also carried out, and on that occasion the cloud was greater than that we are detecting so far, both in extension and at altitude," he adds.

The volcanic ashes from the old summit were located this morning south / southwest of the island from the surface to approximately 3,000 meters of altitude, and extends about 75 km from the center of the eruption to the farthest point.

At least at the moment, the volcancia eruption is not affecting the flights that, according to Garcés, "are operating normally in the Canary Islands area and at all airports, including the airport of La Palma".

"In ENAIRE we have activated the procedure of action on volcanic ash in coordination with other agencies such as AESA, AEMET DGAC, Aena, Eurocontrol, among others. We carry out a permanent monitoring of the position of the cloud both in amplitude and the altitude, and of How it is evolving, specifying the direction towards which is being displaced. This information, which is received from the volcanic ash warnings center, and that is expressly destined to aviation, we keep it updated at all times and we disseminate it for companies Aerials and any other airspace user, so that the security of flights is always guaranteed. "

From the control center in the Canary Islands, they also transmit in real time the most up-to-date information for flights, "because these can have modifications of their route to avoid a specific area that is affected by the cloud of volcanic ash".

As regards the dispersion of sulfur dioxide that will affect the peninsula in the next few hours, Garcés says that "does not have the same entity as the cloud of volcanic ash for aviation, so monitoring is focusing on it ".

1 Analysis of the iPad Mini 2021: Five reasons why it... 2 There is a pending package for you: the new fraudulent... 3 Microsoft launches five new surface to welcome Windows... 4 Ronnie Brunsjwik, Vice President of Suriname: Football... 5 Inditex file to Rachel Valdés as an ambassador and... 6 Angelina Jolie and Brad Pitt again to Gresca: Now... 7 Lolita, afflicted, after the wedding of Elena Furiase:... 8 Cold Water Jug from INE: Spain grew in the second... 9 Coronavirus today | COVID-19 infection can be an occasional... 10 The PSOE compensates for Calvo and Ábalos with commission... 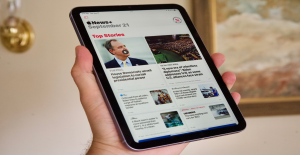