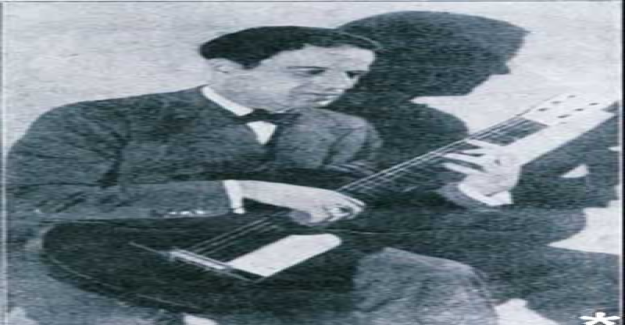 Aragón Televisión dedicated the program La Posada de los Souls last Sunday to Francisco de Val, an almost unknown composer and, however, author of popular and well-known songs that have taken and carry in his featured repertoire interpreters.

Many could discover, for the first time, the azerous life of a tear fell into the sand, how beautiful my girl is, Sierra de Luna (the Ebro Guarda Silence), those green eyes, bells of the village, Torito Bravo, It will be a rose, and up to 300 compositions more than various genres such as Spanish song, tangos, boleros and jota coplash.

They say it was a very friend of Carlos Gardel and who was with the tenor Miguel Fleta at the time of his death.

Francisco García de Val was born in 1897 in the town Zaragozana de Villafeliche, known as the people of gunpowder by their mills that formed the real gunpowder factories. At the age of three, the family moved to the neighboring town of Jaulín, because his father, Anacleto García, was the veterinarian. In Jaulín he started playing the guitar and escaped from home, because his progenitor did not want it to be an artist.

When he turned 20 he was called to fulfill military service, destined in Barcelona, something that changed his life and began to compose.

Poet, singer and composer, wrote two singing books and poetry and Ángelus, in 1932 and 1940, recorded some records, triumphed both in Spain and in America and he made songs for film as Tango and passed the tornado in Mercedes movie; Bells of the village in peace; Damn of oblivion in Malagueña; o Travel in a thiovivo by José Luis Garcí.

His biographer Ramón Gaspar says he won a lot of money for copyright, but since he was "very bohemian and liked the game and night, he did not marry, with which he was always deck. He was a man who lived at the top and He died poor in a pension of bad death, after having had a pisage in the center of Madrid. So poor that he was sorry, he tells a great tenor, and he did not allow him to invite him to a coffee. "

Francisco de Val died in Madrid in 1984 and is buried in the Osar of the Cemetery of the Almudena.

In the aforementioned program, the mayor of Villafeliche, Agustin Caro, recalled that he only returned to the town on three occasions, one to ask for a birthplace, another with a group of Jota and dedicated himself to Rondo through the streets and the third with Mikaela , Artist with whom I planned to get married, something that did not happen.

From that visit is the photo in which the two are together and that the composer dedicated to the mayor of the moment. It is one of the few that preserved most recently from him and that appears in publications such as the book Francis de Val, Vida, Poetry and Music, by José Ramón Gaspar and Patxi Mendiburru who took out of oblivion to the composer and carried out an investigation on His poetic and musical work.

He is reminded him as a Bohemian man, who walked through Madrid, for the festival rooms and musical publishers offering his songs. He dressed in white shirt, a handkerchief on his neck and another in his jacket pocket.

I did not know music, he composed the lyrics and melody and by taking her to a teacher to make her arrangements for sheetting, "they used to take care of musical rights. He knew it and did not care, because in the background he was proud of Code with these people, but the author was him, "Ramón Gaspar recalls.

There are at least two the songs of Francis de Val about whose authorship has emerged the controversy. In 1949, he composed the bolero asked me a kiss, that Peret transformed in 1967 with a rumba air, in a tear he fell into the sand.

Francisco de Val demanded his copyright and the General Society of Authors sued Peret, who had to settle for a simple interpreter of this song.

And the controversy was tiled. However, Francisco de Val himself recognized that Peret's arrangement was "the suit tailored to his melody" and that was the song with which the most copyright he had charged.

The other pugna refers to the authorship of how beautiful my girl is. Florencio Ruiz Lara, named Artistic Flowers The Gaditano, born in Algeciras in 1921, has always argued that this song is his.

However, those who have researched the life and work of Francisco de Val have found a book of poetry, Angelus, published in early 1948, almost two years before the pretension of flowers, in which it appears how beautiful my girl is As musicada, with air of Habanera and Bolero, with the two usual stanzas and chorus and three more stanzas.

Since 2010, these arguments were presented, no one has proposed any other against.

1 Consumption sponsors a symbolic toy strike to sensitize... 2 Volcano La Palma, Last Hour Live | Old summit lava... 3 The incidence reaches high risk in Spain with 305... 4 CSIC researchers identify a new intestinal bacteria... 5 At least 138 dead in tribal clashes in Darfur 6 The FDA gives green light to immunization with antibodies... 7 Nanni Moretti: You have to resist Netflix dictatorship... 8 Javier Peña: The Felix Rodríguez from the source... 9 Education maintains that it will not do anything in... 10 Edify, the Valencian version of Scott twins to buy...