Times of the National Police have found Yanira Arias Mendoza on Wednesday, and his 3-month-old baby, whose disappearance in Zaragoza was denounced on January 1. 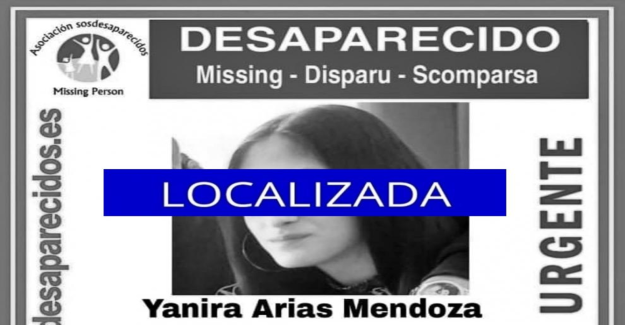 Times of the National Police have found Yanira Arias Mendoza on Wednesday, and his 3-month-old baby, whose disappearance in Zaragoza was denounced on January 1.

The agents have been located healthy and saved after starting a search device in the Aragonese capital, according to sources of the Aragon Police Superior Headquarters.

As the mother explained in police station, the day of her disappearance The girl went to the doctor with her baby on December 30. Apparently, the little one was not well and the teenager she said that she was approaching him to the health center to examine him. However, neither of them later returned home.

The mother also indicated that the young woman could have gone with a young man, equally minor, at the departure of the health center. When dealing with two minors, the Aragon Police Superior Header immediately established a search device to try to locate them.

On the other hand, the National Police is still looking for Clara Cecilia Domínguez Parra, 17, disappeared from its home in the Aragonese capital for more than a month.

His family saw her for the last time on December 1, 2021. It is a young woman in thin complexion and brown eyes, with long, brown hair.

1 The UCO relates Zaplana with the bleach of 2.9 million... 2 Die at 66 years of a infarction Miguel Ángel Fumanal,... 3 The audience keeps prisoner to 'El Pollo' Carvajal... 4 The president of La Rioja dismisses his counselor... 5 Alberto Rodríguez resorts to the constitutional the... 6 Atlético takes it very seriously and devours to the... 7 Avian influenza that has devastated Israel causes... 8 The scandal of Alberto Garzón Puntilla to United... 9 The journalist Inés Martín Rodrigo wins the Nadal... 10 Why do some people seriously sick from Covid-19 and... The UCO relates Zaplana with the bleach of 2.9 million...