This is how technology helps reforest a forest

So far this year, Spain has suffered 20 great fires that have left more than 86,000 hectares burned. The figure, which represents an increase of 5% compared t 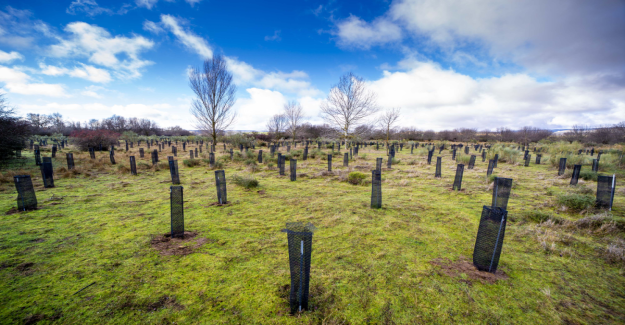 So far this year, Spain has suffered 20 great fires that have left more than 86,000 hectares burned. The figure, which represents an increase of 5% compared to the average of the decade, is especially worrisome since, according to Greenpeace, forest fires suppose twice as many carbon dioxide emissions than the entire fossil industry of the European Union.

Reforest and regenerate the forests and compensate the CO2 issued to the atmosphere to mitigate climate change is the Green Engine goal, initiative of the Repsol Foundation and Sylvestris Group and which has now been added Banco Santander, which will finance the creation of three Forests with a total extension of more than 300 hectares (275,000 trees). The first of them will be planted in Extremadura, first community in joining the project, which will follow the Principality of Asturias.

With its participation in Motor Green, a strategy designed according to the standards of the Spanish Office of Climate Change, Ministry-dependent Certification Agency for the Ecological Transition and the Demographic Challenge, Banco Santander will make it possible to compensate the emission of 82,000 tons of CO2.

Since the Repsol Foundation explain that it is a "pioneer because it covers all stages of the creation of carbon sinks through planting. From the identification and analysis of the best land, until the generation of credits for compensation of emissions, going through a rigorous and professional design for the creation of resilient forests. "

The innovative of the initiative, which aims to convert to Spain in European reference in the CO2 compensation sector, is that it uses its own methodology to strengthen the conservation of the planted trees, something key for the resilience of the forest in the future. For this, it uses existing, but innovative technologies within the forestry sector, such as sensor and digitization tools of the forest; Drones for land monitoring; or Blockchain for the traceability of credits.

The project will begin this fall in the Extremian Community, specifically in the Sierra de Gata, Comarca Cacereña that has seen 14% of its area in the last two decades, with the reforestation of 5,000 hectares affected by fire. For this, 4.25 million trees of autochthonous species will be planted, such as Rodeno pine (Pinus pinaster), Breblollo (Quercus Pyrenaica), hunter sorbus (Sorbus Aucuparia), Taxus Baccata and Penduel (Crataegus Monogyna), which They will absorb 1.3 million tons CO2 over the next few years, explain from Sylvestris, environmental engineering company responsible for planting.

The initiative will continue in the Principality of Asturias. In total, Motor Green expects to plant more than 61,000 million trees in our country, which will allow the reforestation of 72,000 hectares, a similar area occupied by the city of Madrid, and the compensation of 16.6 million tons of CO2.

In addition to the obvious environmental benefit, Motor Verde also stands out for its social and economic impact, as it will allow the hiring of more than 1,000 workers from the Extremane Peoples who will be reforestated (15,000 throughout Spain), 70% belonging to vulnerable groups. "All contracted workers will receive technical training, which can also serve them for the future for forestry activities on the ground and for prevention in occupational risks," concludes Mar de Andrés, Director of the Social Area of Repsol Foundation.

1 Fleet Managers of Robots: The Heads of Personnel of... 2 Hitler, spongebob ... the EU slows the Covid certificate... 3 SCUF Instinct Pro: Leaving the bar very high 4 This is the new generation of Intel CPUs 5 When Dexter premieres: New Blood, season 9 of the... 6 The Great Wyoming analyzes the reactions to the budgets... 7 Sálvame asks for forgiveness to the gypsies by unfortunate... 8 Isabel Díaz Ayuso visits the anthill for the first... 9 The farce of Ortega: repression and empty streets... 10 Hugo Hard mortifies Athletic in Mestalla with two... Fleet Managers of Robots: The Heads of Personnel of...