This weekend, three planets at sunset

After sunset, this weekend we can enjoy beautiful celestial scenes formed by three planets. Venus will be close to Antares, while Jupiter and Saturn, further 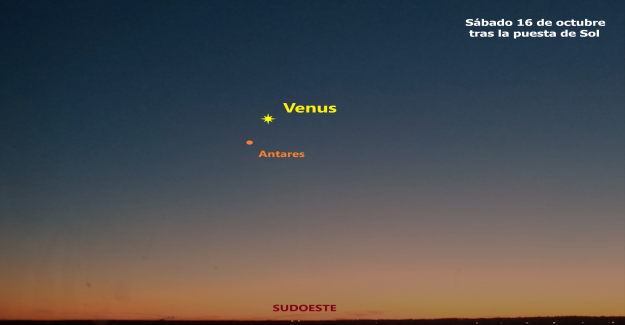 After sunset, this weekend we can enjoy beautiful celestial scenes formed by three planets. Venus will be close to Antares, while Jupiter and Saturn, further east, will be close to the crescent moon.

This weekend it is convenient to be attentive after sunset. It has barely elapsed one hour since the Sun has been hidden from the west horizon, it is advisable to look at the southwest to admire the splendid Fulgor of Venus. And very close in the sky, at a slightly lower elevation, the twinkling glitter of the star Antares will be doing more and more patent as the sky darkens. Both ASTROS are separated by an apparent distance equivalent to twice the diameter of the full moon.

Antares, the brightest star of Scorpio's Zodiacal constellation, is a red supergiant located about 550 light years away. Its luminosity exceeds the one of our sun 10,000 times. Its size is so huge that, if you occupy the place of the Sun, in the center of our Solar System, Mercury, Venus, the Earth and Mars would be under the surface of the star, a surface that would cover up to an area located on the outer edge of the belt of asteroids, near Jupiter.

But, despite being so luminous and so enormous, being located 45.6 million times farther than Venus, Antares is shown with a brightness that is about 150 times lower than that of our planet brother.

Antares now appears close to Visual to Venus for being located in an area of the sky close to the ecliptic, the imaginary line on which we observe to the planets (and other objects) of the solar system. At other times of the year, it appears near other planets. Thus, every 23 months, Antares is situated near Mars (Ares in Greek) and then it is patent that both stars have a brightness of the same reddish hue. From this, and from its proximity every almost two years, the name of the star comes: Anti Ares, the rival of Ares, because it becomes rival Mars in protagonism.

Once observed Venus, when the sky is already obscured, we direct the look to the southeast. In that area of heaven, we will see Jupiter, on the border between the constellations of Aquarius and Capricorn. Jupiter is now the brightest star of heaven after the moon and Venus. And to the right of Jupiter, we look at the firmament, we can also observe Saturn, much weaker and more reddish.

We can now materialize the ecliptic line by joining the apparent positions of Jupiter, Saturn and Venus. But remember that these planets are located at very different distances: Venus is now 114 million kilometers from Earth, while distances to Jupiter and Saturn are 670 and 1,450 million kilometers, respectively.

The two gaseous giants are gaining height as the night progresses and hide at sunrise in the west. In the middle of the night, there are about 50 degrees of elevation under unbeatable conditions for observation from Spain. In astronomical terms: The magnitude of Jupiter is now -2,7 and its apparent diameter measures 45 seconds of arc (about 40 times less than that of the full moon). Saturn's magnitude is now 0.5 and its apparent diameter is 17 seconds of arc. This is equivalent to saying that Jupiter looks about 19 times brighter and has an apparent size 2.6 times greater than Saturn's.

This weekend, the Moon is already very bright because the next Plenilunio will take place on the 20th. On Saturday, 16 and Sunday, we can see it more and more of Jupiter, following the ecliptic direction.

These days is also observable the little mercury during a short space of time at dawn for the east, an hour before the sun rises. That is, it is convenient to observe it at about 07.30 in the morning (peninsular time) and, as Always, from a place that has a well-clear horizon of obstacles such as mountains, trees or buildings.

However, Mars is still close to the Sun Directorate and is not observable at this time. We will have to wait for the month of December to see him appear, at a very low elevations, Alba for the Southeast.

1 Trade unions take advantage of the PSOE Congress to... 2 Ábalos, Calvo, Díaz ... the congress of the 'fallen'... 3 The military claim a dignified salary and warn: There... 4 A tenant receives at home throws that claimed the... 5 The light marks the most expensive Saturday in history,... 6 The government no longer holds the promise of Calviño... 7 An Argentine judge processes former Minister Rodolfo... 8 The writers behind Carmen Mola: We were tired of lying 9 The United Kingdom will review the security of the... 10 They find the corpse of the military disappeared in... Trade unions take advantage of the PSOE Congress to...