This will be the final of 'Masterchef Junior 9', edited so that Verónica Forqué appears

MasterChef Junior 9 closes the day of kings, that is, on Thursday, January 6, its shortest edition, since TVE only bought four deliveries instead of the six tha MasterChef Junior 9 closes the day of kings, that is, on Thursday, January 6, its shortest edition, since TVE only bought four deliveries instead of the six that we had seen in other editions.

Olivia, Carla, Guillem and Ariel, who conquered on Monday a hole in the final will opt to the 12,000 euros of the prize and a four-day cooking course at the Basque Culinary Center.

We will know the winner of MasterChef Junior 9 Day of Kings starting at 10:00 p.m. Do not miss our direct!

Once again it will be a program full of surprises. The public television network has advanced that the finalists will have to cook two dishes that will be linked by some of the aspirants of the latest edition of MasterChef Celebrity. The chain has not specified its names. Maximum intrigue!

However, after the death of the actress Verónica Forqué, who participated in this recording, we will not see his images, as the Shine Iberica producer has advanced. As confirmed to the EFE agency, the presence of Veronica Forqué "was eliminated" out of respect for her and her family. "

The first thing Masterchef Junior offers his followers is a trip to ancient Egypt. The four finalists will have to integrate into their dishes ingredients that were already used thousands of years ago.

The second surprise will be the appearance of David Bustamante, a finalist of Masterchef Celebrity 6, and the first great challenge to which they will have to face is to reproduce a dessert of the Chef Martín Berasategui. The winner will be made with the first jacket that gives access to the duel of the final.

The second jacket will have to be played between the three finalists that remain. The test will take place in Cadaqués, the town of Girona where Dalí lived. They will have to cook at the restaurant 'Share'. Oriol Castro, Mateu Casañas and Eduard Xatruch will be the chefs in charge of creating this menu. Each applicant will be responsible for preparing two dishes that will taste some of the aspirants of the latest edition of MasterChef Celebrity.

In the final duel, the chosen ones will have to conquer the chef's palate Eneko Atxa and the Jury. The two finalists will design and cook a full menu. The menu will have to tell its own story, that is, to talk about its evolution as a cook or cook after this experience and, also, of its origins. As in other editions, the contestants, who fight for the 12,000 euros, must convince the jury that they have managed to dominate the avant-garde techniques learned these weeks.

1 Biden and Congress commemorate a year since the violent... 2 Taliban in Afghanistan turn blind eyes to Pakistani... 3 Trump holds on to GOP despite violent uprising 4 Disney's South Korean star Suddenly Disney + Kim Mi-Soo... 5 The AP Interview: Pelosi claims that democracy won... 6 New Orleans is the birthplace of joy and caution. 7 Parents of too young children are troubled by the... 8 Ana War reveals problems among OT contestants and... 9 France imposes millionaire fines to Google and Facebook... 10 National offensive of PP against Garzón: will require... 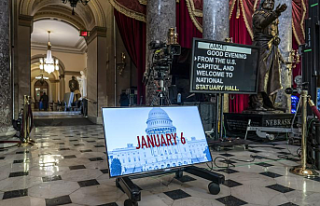 Biden and Congress commemorate a year since the violent...