Those Andersen Bråthen, the Norwegian killer: a Danish converted to Islam and signaled by radicalization that might have mental problems

A judge decides this Friday if Decree Provisional Prison for Even Andersen Bråthen, the Danish of 37 who acknowledged having killed five people in an archery an A judge decides this Friday if Decree Provisional Prison for Even Andersen Bråthen, the Danish of 37 who acknowledged having killed five people in an archery and arrows in the southeast of Norway.

The emotion follows the skin flower in the habitually gentle town of Kongsberg, whose inhabitants gathered in silence and with candles on Thursday night, just 24 hours after the attack left by five dead and three wounded. "We are a small community and we need to be there for each other," explained Kristine Johansen, a 29-year-old teacher.

Described by the police as a 37-year-old Danish citizen converted to Islam and indicated by radicalization, Bråthen admitted in his interrogation to have committed the attack with an arc and arrows before being arrested.

"We would like to have it in provisional prison for at least four weeks," said the prosecutor in charge of the case, Ann Siren Svane Mathiassen. The Kongsberg court will decide on the issue on Friday morning. Probably not even necessary the presence of the attacker who, according to the police, does not oppose the incarceration.

In the light of the modus operandi and the alerts on a possible radicalization, the researchers are tilted on the track of a Yihadist act. "There is no doubt that the act itself presents indications that suggest that it can be a terrorist act, but now it is important that the investigation progresses and that the suspect's mobile is clarified," said Norwegian security services (PST ) Hans Sverre Sjøvold.

Nor is the possibility of Andersen suffering from suffering mental problems. "He is a person with ends and come in the health system for some time," said Sverre Sjøvold. The prosecutor also ensures that the subject began on Thursday to be the subject of a psychiatric evaluation, but the conclusions of it may take months.

The suspect "is an acquaintance" of Norwegian security services (PST), although few details of it were given. "There have been fears linked to a radicalization previously," explained a police officer, Ole Bredrup Saeverud. These suspicions went back to 2020, even before, and gave rise to a police monitoring.

According to Norwegian media, Bråthen had some judicial background. In 2020 he was forbidden to visit two relatives for having threatened one and in 2012 he had been convicted of robbery with raid and ax.

In a 2017 video recovered now by several media, you see yourself preaching your faith in a threatening tone: "I am a messenger, I have come with a warning: is this really what you want? (...) be witnesses that I am a Muslim ".

Bråthen, who probably acted only according to the police, killed four women and a man between 50 and 70 years old at several Kongsberg sites, a small town of 25,000 inhabitants in which he himself resided, 80 km west of Oslo.

Under anonymity, a neighbor described it as an unfriendly person, with an imposing stature and shaved hair. "He never smiled, no expression on his face," he said, assuring that he was "always alone".

Norway has disrupted in the past several attempts from Islamist attacks. However, the Nordic country has been impacted by two attacks of extreme right in the last decade, as the one missioned by Anders Behring Breivik in 2011, in which 77 people died

1 An earthquake of magnitude 6.4 shakes Solomon Islands,... 2 The family of Raúl Baduel, the military ally of Chávez... 3 Anne Hidalgo, chosen socialist candidate in the presidential... 4 The Velvet Underground, the group that said not to... 5 'Pleasure', the first film that portrays the world... 6 Deborah Feldman: You can never erase the hate virus... 7 Michael Caine announces that he leaves the action... 8 The national ballet triumphs in the royal theater... 9 C. Tangana about his video in the cathedral: It was... 10 The Icelandic film 'Lamb', Best Film Festival Film... 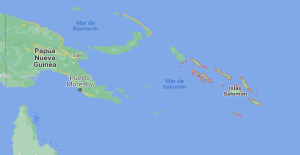