The social network of the US President, Donald Trump, has finally seen light. He has done it, yes, in a limited way, at the moment only as an app for iPhone t The social network of the US President, Donald Trump, has finally seen light. He has done it, yes, in a limited way, at the moment only as an app for iPhone that can be downloaded from the AppStore, and with numerous problems when registering new users.

Truth Social, which Trump promised to be founded as an alternative to Twitter after being expelled from it, should have been released weeks ago but has suffered numerous delays during his development. Although on paper is already available, the creation of new accounts continues to give problems. The telephone number check service (which is essential to register) does not always send the validation codes, for example, and in many of the other steps of the registration process sometimes jump error messages.

Since the company explain that problems are due to high interest on the part of the users, which have overflowed the servers, and to which it is a staggered launch that should end at the beginning of March. On the Web, Truth Social ensures that there will soon be an available version also for Android, but unlike Facebook or Twitter, you will not have a web version at the moment.

The new social network has been in evidence during the last weeks, with some 500 registered users, most belonging to the circle close to the American Former Sonent. It presents herself as a network that "fosters an open, free and honest global conversation without discriminating against political ideology." The Republican Excender of California Devin Nunes is, since last January, responsible for it.

Your future, in any case, is uncertain. Truth is fundamentally directed to part of the American electorate on the right or extreme right that he considers that Twitter, Facebook and other social platforms censor their opinions.

Other social networks, such as Gethtr or Parler, have tried to occupy that same space but their reception has been very cold. The activity is very low compared to social networks already established and have been filled with automated accounts and spam. Truth's main attraction is that he is driven by Donald Trump himself, which right now has an official presence in any of the most audited social networks.

The problems of the new network, however, are not only technical. The company behind the application, Trump Media & Technology Group, is also faced with an investigation by the North American Market Commission (known as the SEC, for its acronym in English) by the way it aims to go on a stock market, Taking advantage of what is commonly known as a "Check Blank" company. It is an entity built without specific purpose listed on the market and then acquires another company, in this case Trump Media & Technology Group, to have to avoid the long registration process.

Although research may end up giving the approval to the purchase, the interest that SEC has placed on the company has scared many of the potential investors.

1 The Georgina effect: Interest grows through the places... 2 Militants and territorial charges launch a manifesto... 3 President of Ukraine: "We don't fear anyone" 4 Ukraine-Russia crisis: What you need to know about... 5 Mexico City legislators may ban bullfighting 6 UN alarms at growing reports of Greek migrant pushbacks 7 Northern Europe is battered by a third major storm;... 8 50 years after Nixon's visit, US-China relations... 9 Madagascar, hit by Cyclone Ivan, braces for another... 10 First Peruvian ex president on trial in Odebrecht... 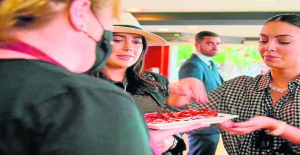 The Georgina effect: Interest grows through the places...