The US Department of State has grateful to the Government of Spain its "collaboration" during the last 20 years in Afghanistan and has congratulated him with the celebration of the National Festival, which is celebrated today.

Thus, the Secretary of State, Antony Blinken, has highlighted the "joint work" between both administrations to "put safe" to those who supported collective efforts in Afghanistan.

For Blinken this was a testimony of "solidity" of bilateral ties that unite the United States and Spain, and has confirmed that it is "in this line" in which he expects to travel to Spanish territory next summer to participate at the Summit of the NATO.

In addition, the State Department considers Spain "an ally of NATO and a friend of the United States", a relationship that is "reflected" in economic, cultural and educational exchanges among citizens of both nations.

"On this special occasion, we hope to deepen our friendship, strengthen our ties and expand our cooperation based on our shared values, my best wishes for a happy National Festival of Spain," he has drew.

"On behalf of the Government of the United States and the American people, I send my best wishes to the people of Spain when celebrating their national day," Blinken expressed.

1 An earthquake of magnitude 3.9 feels at about 40 locations... 2 The first flight with more than 80 Afghan collaborators... 3 Pablo Married Duisa The PSOE: So far we have arrived 4 Investment per inhabitant of the Government: Catalonia... 5 Brussels ignores the claims of Spain to stop the crisis... 6 Habanos for this time 7 The Australian IFM Fund fails in its OPA to Naturgy... 8 Raquel Sánchez justifies the increase in investment... 9 European justice dictates that the social bonus of... 10 The CEO of Kraft Heinz warns that you have to get... 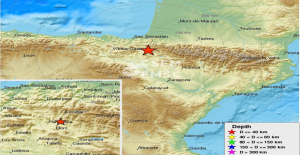 An earthquake of magnitude 3.9 feels at about 40 locations...