Mario Vargas Llosa broke the Protocol on Monday at the House of America during the opening act of the América festival, in which he participated next to Sergio Mario Vargas Llosa broke the Protocol on Monday at the House of America during the opening act of the América festival, in which he participated next to Sergio Ramírez. The Nobel Prize, as soon as the act began, he asked for applause to the public to celebrate that the Nicaraguan writer was not imprisoned, as Daniel Ortega pretends. The public responded without hesitation. Part of him also stood up.

"Sergio Ramírez has suffered an absolutely scandalous abuse, today we have to surrender a tribute. Ortega and his wife, that sinister couple, they have banned their book [Tongolele did not know how to dance (Alfaguara)] but it has been saved from jail," he added the Author of conversation in the cathedral.

Already in the debate, Vargas Llosa added that it is very difficult not to be influenced in Latin American literature for politics. "Even Borges, who did not speak of politics but he did politics with the statements of him."

For his part Ramirez, with a great sense of humor, he said: "I have always wondered how a Swedish or Finnish writer will do. How the Holland Prime Minister goes by bicycle while Ortega is escorted by 40 or 50 vehicles and helicopters ».

"They are not easy days for my wife and me, trying to avoid being imprisoned, we were in Costa Rica when we arrived the prison order and that way we have avoided being one of those 240 political prisoners in Nicaragua," Sergio added Ramírez.

And more seriously: "In Nicaragua we have almost always lived under dictatorships. I was born under the old Somoza; Then, in college, was his son, and then I insisted on finishing another somoze. And now I'm under another dictator. " He also compared Ortega with Stalin: if the Soviet dictator erased from the photos to the collaborators who had fallen out of favor, Ramírez said Ortega had stayed alone. "It is also unprecedented in Latin America that a couple governs a country."

"The evil of authoritarianism [in Latin America] is old dating. Caudillismo has not yet been resolved in the 21st century. The Sandinista Revolution failed by the weight of authoritarianism ». He added the author of Margarita, is Linda the sea. "All presidential candidates in Nicaragua have been sent to jail historically by dictators. This would be too exaggerated until for a novelist," Ramírez has sustained.

Vargas Llosa also commented on a "problem" with Latin American literature, that the genre of the novel was forbidden for 300 years, in the colonial era, "what was a great incentive to read novels". He also referred that the problems of the various Latin American countries are similar.

The trialist Carlos Granés took out the "cosmopolitan fervor" of another Nicaraguan, Rubén Darío, which gave rise to Vargas Llosa to comment that his generation, that of the boom, reacted against "the indigenist movement of the previous one, very stuck to the Earth. Latin American literature is not conditioned by a tradition, adopts very diverse influences. "

In the event he also participated Pilar Reyes, Editor of Alphaguara and the two writers. It was she who commented that she always ends up talking about politics in Latin American literature. "It is very difficult not to be influenced by politics," Vargas Llosa acknowledged. Sergio Ramírez recalled that in the United States it caused strangeness that Norman Mailer was postulated as a candidate for the Mayor's Office of New York. "In Latin America," he said in a joking tone, "when writers are good, it is believed to be for other things. Rómulo Gallegos was president of Venezuela, but only eight months. And it was because he wrote Dona Barbara." And he added: "Vargas Llosa was defeated by one of the characters of him"

1 The Bell of the Carabela Santa María de Cristóbal... 2 Fair of the book of Madrid: chaos, saturation, 90-minute... 3 Sergio Ramírez: Return to Nicaragua would be a jail... 4 Olivia Rodrigo is imposed on Justin Bieber at the... 5 Susanna Clarke: I never thought I could write a book... 6 250 writers, artists and journalists sign a letter... 7 Nicaragua kidnaps the new novel of persecuted Sergio... 8 Huge Alejandro Marcos and another sensational afternoon... 9 Final of the FMS International: Gazir, the new boss... 10 So start 'accidental spy', by Jorge Dezcallar 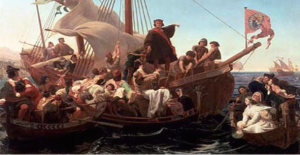 The Bell of the Carabela Santa María de Cristóbal...