Venezuela: Trump does not exclude the possibility to meet with Maduro

"perhaps I could think of. (...) Maduro insists that we meet. And I'm never opposed to meetings." In his particular style, Donald Trump has issued Friday in "perhaps I could think of. (...) Maduro insists that we meet. And I'm never opposed to meetings." In his particular style, Donald Trump has issued Friday in an interview with the american site Axios the hypothesis of a meeting with the president of venezuela, Nicolas Maduro. This, even as the us administration has put a price on the head of the venezuelan president to $ 15 million for drug-trafficking, there are only a few weeks, and increased regularly its train of sanctions for many months.

This meeting is desired for many months now by Nicolas Maduro. But after Washington has demonstrated its support to Juan Guaido as interim president at the end of January 2019, followed by fifty countries, including France, the bridges seemed to be cut between Washington and Caracas. Juan Guaido had even been invited to Washington, d.c., received in the White House and had witnessed the speech on the " State of the Union last February. Support beneficial so far for the main opponent of Nicolas Maduro, which seemed to protect them from arrest, who is being pursued by the justice of his country for coup attempt.

in A reversal of strategy

This interview with Axios seems to announce a complete reversal of strategy. To the extent that during the exchange, the president of the United States has expressed doubts about the qualities of Juan Guaido. A real blow for the opposition antichaviste. Persecuted by the power, imprisoned, forced into exile or hiding, or even killed by the political police, the Sebin, marginalized by judicial decisions of a supreme Court in the pay of the government chaviste, the opponents could not hang on to one thing only: the unwavering support of the White House. There has been no official reaction to the power of Maduro, nor in the entourage of the Guaido. If this last could feel protected repressive actions are a direct part of Nicolas Maduro, "this protection has just disappeared," according to one close to the interim president, vexed.

Trump on Guaido : "A weak man unlike Maduro"

To the extent that the government of Maduro has planned to organize parliamentary elections in December that will deprive Juan Guaido of his status as president of the national Assembly, the political parties supporting them have announced their refusal to participate in the elections. But this release might change that, and there is no doubt that representatives of the venezuelan opposition will rush to Washington to get the support of the United States and try to replace Juan Guaido in the diplomatic game of the american president.

" READ ALSO: Venezuela: Juan Guaido in the process of marginalization

According to the excerpts of the chapter on Venezuela in the book shock of John Bolton, Donald Trump has never enjoyed Juan Guaido, "a weak man unlike Maduro" according to the president's remarks reported by his former national security adviser.

This new positioning of Donald Trump's surprise, a few months before the us presidential election. Indeed, in the key State of Florida, the electorate is latino, which means a lot of Cubans and Venezuelans, is wind standing against the venezuelan government, which is a lot closer these last few years of the castro regime, to the point that the army cuban would play a key role now in the armed Forces of the country.

Donald Trump has attempted Monday to correct a little shooting tweet by writing that he was ready to meet Maduro "only to discuss an exit pacific power". Not sure that his comments are likely to reassure the venezuelan opposition.

1 A first car borrows the new bridge of Genoa 2 ClickTrades Offers 0 Commission Trading Conditions... 3 Madagascar: Lush meadows in the burnt-out forest Paradise 4 Unemployment Fund: the help without Kungelfaktor 5 Corona-implications for the culture: The art of self-help 6 75. Founding anniversary of the CDU: in flight, in... 7 The battle for airline: Lufthansa help at risk –... 8 How Dunkirk has set up its bus service free of charge 9 Feast of music: Franck Riester considers that the... 10 Seriously Herzfelds discovery: The once was a king,... 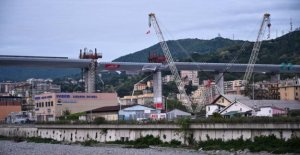 A first car borrows the new bridge of Genoa