WHO approves the use of malaria vaccine in children

The World Health Organization (WHO) has approved for the first time in history the generalized use of a vaccine against malaria, which has already been used as The World Health Organization (WHO) has approved for the first time in history the generalized use of a vaccine against malaria, which has already been used as part of a pilot program in Ghana, Kenya or Malawi, where it has been vaccinated More than 800,000 children since 2019. "This is a historical moment. The long-awaited vaccine against malaria for children is a breakthrough for science, child health and malaria control. The use of this vaccine in addition to The existing tools to prevent malaria could save tens of thousands of young people each year, "the WHO General Director of the Director Ghebreyesus has highlighted by press conference.

Malaria remains one of the main causes of disease and child death in sub-Saharan Africa. More than 260,000 African children under five years old die annually from malaria.

In recent years, both WHO and other organizations have warned of stagnation in progress against this deadly disease. "For centuries, malaria has stalked to sub-Saharan Africa, causing immense personal suffering. We have been waiting for an effective vaccine against malaria and now, for the first time, we have a vaccine of this type recommended for its widespread use. The recommendation of Today it offers a ray of hope for the continent that supports the largest burden of disease and we hope that many more African children are protected against malaria and become healthy adults, "the WHO Regional Director for Africa, has pointed out. Matshidiso Moeti.

Based on the advice of two WHO global consultative bodies, one for immunization and another for malaria, it has been recommended that this vaccine be used, known as RTS, S / AS01 and developed by the GSK pharmaceutical company, for prevention of malaria by 'P. Falciparum 'In children living in regions with a moderate to high transmission. The vaccine should be administered in a four-dose scheme in children from five months of age for the reduction of disease and loading malaria.

The data from the pilot program showed a reduction of 30% of the fatal malaria, "even when it is introduced into areas where insecticide-treated mosquito nets are widely used and there is good access to diagnosis and treatment," explains WHO. Likewise, the results indicate that more than two thirds of the children of the three countries that do not sleep under a mosquito net benefited from the vaccine.

"The vaccine has a favorable safety profile. The introduction of the vaccine is feasible, with good and equitable coverage through ordinary vaccination systems," adds the United Nations International Health Organization. Likewise, it is considered that the vaccine "is profitable in moderate to high transmission areas of malaria". The financing of the pilot program comes from collaboration between three agencies: GAVI, the Alliance for vaccines; The Global Fund for the Fight against AIDS, Tuberculosis and Malaria; and unitaid.

1 'Mercenarian' bacteria to fight resistant infections 2 Chemistry Nobel for parents of a technique to create... 3 Those over 70 will receive the additional dose from... 4 EMA warns of the long-term protection loss of vaccines 5 The incidence in Spain stays at 25 cases of the new... 6 An actress and a Russian director start filming the... 7 The anchor of a ship hitting against the pipeline,... 8 William Shatner, Captain Kirk of 'Star Trek', will... 9 Nobel Prize in Physics to Manabe, Hasselmann and Parisi... 10 Boris Johnson will announce the decarbonization of...

A Spanish study opens the door to personalized medicine in cardiology

Alex Saab appears for the first time before US justice

Concha Márquez Piquer, the details of his divorce of Curro Romero

Felipe VI: Teaching Spanish is more than teaching a syntax and a dictionary
BREAKING NEWS HEADLINES 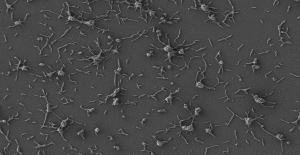