Who are the care givers who are entitled to the premium Covid ?

How to reward the effort of those thousands of carers who have mobilized all their forces during the outbreak of coronavirus ? The government has planned to mak 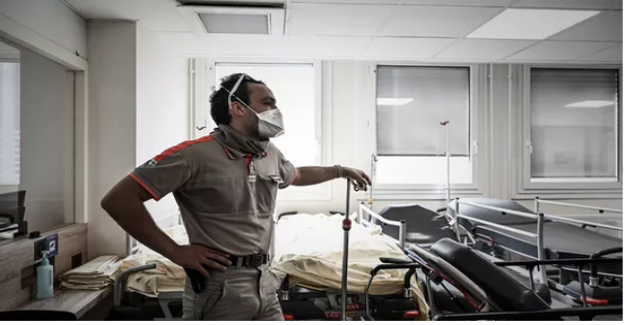 How to reward the effort of those thousands of carers who have mobilized all their forces during the outbreak of coronavirus ? The government has planned to make a national tribute on the 14th of July, to hand them a medal for commitment. But also, most immediately, to pay a premium.

This premium should reward "the incredible dedication of all the staff health," according to the words of prime minister Édouard Philippe. It is a premium "free of any tax liability or social, that is to say, net of all", has he said on 15 April, after a council of ministers. This represents an effort of 1.3 billion euros from the State, according to estimates by the ministry of Health.

1500 euros net in the departments most affected

The amount of this premium, however, varies from one professional to another, depending on several criteria. The first is the department of the year. In the forty departments most affected by the epidemic, the list of which has been specified by decree of June 13, the employees will receive the maximum bonus of 1500 euros. This is true for the caregivers, but also other categories of personnel (administrative officers, in particular), that they are holders, trainees, contractors, or apprentices.

departments involved in the maximum bonus are mainly located to the east of the territory. In these areas in the first row, the employees of the public hospitals, but also those of long-term care facilities, foster care, healthcare, centres of care, support and prevention in addiction, will be entitled to the premium. And, regardless of whether their institution was public or private.

color bordeaux, the departments in which the employees are eligible for the maximum bonus of 1500 euros. Le Figaro

The premium must be paid no later than with the pay slip of June. All the agents of the AP-HP working in the Hauts-de-France or Île-de-France have already received, along with their salary for the month of may, this bonus of 1500 euros, we said.

A reward of 500 euros in the rest of France

In the 61 remaining departments, less affected by the epidemic, the health care staff shall receive a reduced premium: the amount has been set at 500 euros.

117 hospitals, yet located in those counties least affected by the epidemic, however, the exception to the rule. "These include hospitals that have hosted some of our patients, when they were transferred," explains Christian Prud'homme, secretary general of FO, and a nurse anesthetist at the hospital of Hautepierre in Strasbourg, which has welcomed a large wave of patients. In these institutions the list of which has been published in a decree, the directors may choose to pay the maximum bonus of 1500 euros. They will have to in spite of everything make choices: no more "40% of the staff, the physical facility" will be able to receive this maximum bonus.

For all their employees affect a maximum amount of € 1500, irrespective of their department of exercise, some private organizations have decided to "complete" the premium promised by the government. This is particularly the case of the group Korian, who has 300 long-term care facilities in France, after a strike of its employees for payment of the premium "without discrimination" for all.

regardless of the department, the premium will be reduced in case of prolonged absence of the employee (he works in the premises of his establishment, or telework). If the employee has been absent more than 30 days during the period from 1 march to 30 April, the amount of the premium will be divided by two. All health personnel will receive in addition an increase of 50% of their overtime hours during the crisis - it should be paid by 1 September.

Some health professionals, including liberals, however, are excluded from this bonus. This is for example the case of home helps. This Monday, the departmental Council of Meurthe-et-Moselle announced the payment of a premium of € 1500 to 2000 officers of the department. Mathieu Klein, president (socialist) of the departmental Council of Meurthe-et-Moselle, criticized the "government's decision is incomprehensible to" pay "the premiums that the personal Status and of the health, leaving local communities to assume the expenses for other professionals".

In the absence of government bonus, other professions will be able to count on their pension funds for their pay aid to the end of the crisis. The Caisse autonome de retraite des chirurgiens-dentists and midwives (CARCDSF) will pay 4500 euro to the dentists and 1000 euros for the midwives. The pension Fund of the liberal physicians (CARMF) goes for its payments of 2000 euros for all the liberal doctors.

The hospital staff to request a revaluation perennial

The government has agreed that the boost that this premium would not soothe the ills of the hospital, which preceded the crisis of the sars coronavirus. "Nobody's going to spit on this premium, for certain employees, such as ASH [Agents of hospital services], or the caregivers, it can sometimes represent a doubling of salary. But this is not the end", writes Christian Prud'homme. The unions, in a broad coalition (CGT, FO, SUD, Unsa) and with several collective hospital (Inter-Hospital and Inter-Emergencies) have called for a "national day of action" on Tuesday afternoon. They are now claiming a renewed appreciation for more sustainable wages, in the amount of 300 euro net monthly for all hospital workers, as well as a great recruitment plan.

Since 25 may, discussions have commenced with the social partners within the "Ségur Health". According to estimates of the Federation hospitalière de France, unveiled by The Echoes , a salary adjustment is expected to represent an additional cost of 5 to 8 billion euros per year for the public hospital, according to the number of professions that may be involved.

The minister of Health Olivier Veran has promised that the remuneration of caregivers in French would be raised "at least" to the level of the european average.

The editorial team conseilleSoignants : hours sup'"Covid" will be paid before septembreHôpital, long-term care facilities: a month after its announcement, the exceptional bonus between in vigueurSujetsAPHPCoronavirushôpitalaucun comment