The everyday test shows: If you want to buy an iPhone 14, you should go for a Pro. 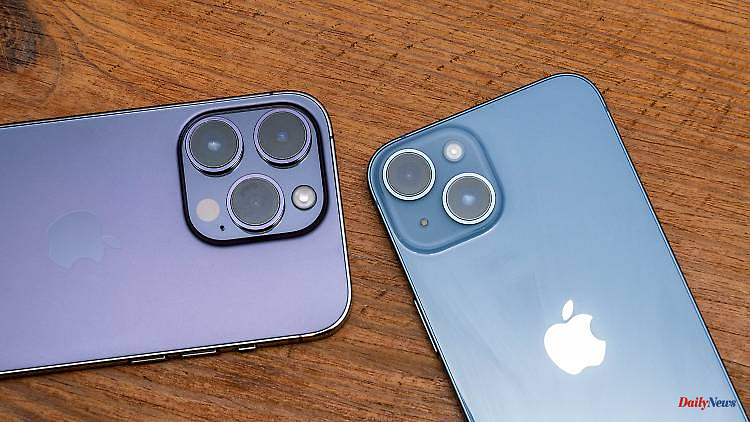 The everyday test shows: If you want to buy an iPhone 14, you should go for a Pro. The standard model is very good, but it's basically just a souped-up iPhone 13. The really exciting innovations are reserved for the iPhone 14 Pro - if you're willing to pay the price for it.

The cheapest iPhone 14 costs around 1000 euros, the Pro version is not available for less than 1300 euros. Apple raised prices hefty at a time when many people struggle to make ends meet. Sure, the euro has fallen sharply against the dollar, but Android makers have refrained from equalizing so far because their customers are more willing to switch to the competition than Apple users are. ntv.de tested whether the new devices are worthwhile for them using the iPhone 14 and the iPhone 14 Pro.

At first you can hardly tell that this is a new generation, except for the new colors, the design has remained practically unchanged. Not much else has happened with the iPhone 14 either. The A15 chip has received an additional graphics core and now corresponds to the processor of the iPhone 13 Pro, the main camera has a larger sensor with larger pixels, and the front camera has been equipped with an autofocus and a larger aperture.

You don't feel the difference in performance compared to the previous model, but the quality of the photos and videos is a bit different. Images generally look better, especially those from the main camera. This is not only due to the larger pixels. Apple has also refined the technology in which machine learning is used to compile an optimal version from several photo variants (Photonic Engine).

At night, the improved sensor, which captures more light, also pays off. As a result, the images are less "smeared" in darker areas, among other things, and provide more details. Overall, the night shots of the iPhone 14 do not have to shy away from comparison with those of the Pro model.

The new action mode, which evens out strong movements and vibrations, pays off for the videos. But the camera needs a lot of light for this, so you can't do anything with it in the twilight or at night. The autofocus and the larger aperture allow better overall selfies, among other things, the bokeh in portrait mode is now more accurate.

In North America, the iPhone 14 can make emergency calls via satellite, but this does not yet work in other regions. The device should also be able to use its sensors to detect car accidents and call the emergency services.

That's it, the iPhone 14 hasn't received any more innovations. And because the camera performance isn't dramatically better than the iPhone 13, 1000 euros or more doesn't really seem justified. Users will probably be just as satisfied with the predecessor, which is currently around 150 euros cheaper, or should buy the iPhone 14 Pro right away.

Apple's Pro models differ more than ever from the standard versions this year. It starts with the fact that the new A16 chip is reserved for them. The processor is a good deal more powerful than its predecessor, but the difference is hardly noticeable in reality. This may change in the future due to new challenges, but currently the chip is not the most important reason for wanting an iPhone 14 Pro.

The display immediately catches the eye, not only because of its higher luminosity. Because the selfie and true-depth cameras no longer look through a large notch that protrudes downwards from the top edge of the screen. They now sit separately in a pill-shaped and a round recess that keep some distance from the edge.

That alone isn't that spectacular, but Apple has come up with something to make the annoying hole in the display a feature by putting notifications, activity, incoming calls, navigation direction, music playback controls, and more in this area indicates. The possibilities are great, there is an interface through which developers can adapt their applications accordingly.

Initially, the display appears to the left and right of the gaps, the area in between remains black. If you tap on it, the corresponding application opens. If you put your finger on the "Dynamic Island" for a longer period of time, it grows into a widget. Different animations are possible and two applications can share the new information area. This looks slick and fun, which makes the display gap almost oblivious.

Another clearly visible feature of the iPhone 14 screen is that it is always on. That means the lock screen remains dimmed visible. In contrast to Android devices, where the "always-on-display" has been around for a long time, the iPhone 14 Pro keeps the entire display and does not switch to black and white mode.

The power consumption is low because of the low brightness and a refresh rate lowered to 1 Hertz (HZ), but the display doesn't really stay on all the time. Among other things, it switches off when the device is lying face down on the table, is not used for a long time or is in the sleep focus. You can also disable the function.

After all, Apple also prefers the pros when it comes to camera equipment. The top models not only have an additional telephoto camera, their main camera now has 48 instead of 12 megapixels (MP) and a larger sensor. By default, however, four pixels are combined for better light output, which means that the resolution remains at 12 MP.

As you can see from the two night shots, the difference to the main camera of the iPhone 14 is not that big. The Photonic Engine seems to have a greater influence here. However, this changes if you activate ProRAW in the settings, which allows photos with 48 MP. You can hardly see the high resolution on the iPhone display, where the RAW photos appear rather soft. The many details only come into their own on larger screens.

The sensor's light intensity pays off more for videos that look better at dusk than the iPhone 14. This also applies to shots taken by the ultra-wide-angle camera. Although it only has 12 MP, it has a larger sensor than the standard model. The telephoto camera with triple optical magnification hasn't really changed, but Apple uses the main camera's 48 MP to display a second, digital zoom level with double magnification.

The battery performance of the iPhone 14 Pro is okay, you can usually get through the day on one charge. However, photo safaris and especially video shoots cause the battery indicator to drop quickly. You can also tell that the chip has a lot to do by the fact that the back gets very warm.

The display with "Dynamic Island" and always-on function is a remarkable innovation, the performance is enormous and the camera improvements are impressive. You can hardly expect more at the moment and ultimately the changes are greater than at Samsung or most of the other competitors. You can't expect big leaps in Google's upcoming Pixel 7 duo in the near future either. In this respect, Apple has done everything right. Whether that justifies the high prices is another matter. 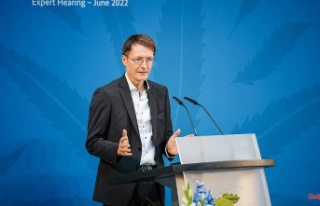 Release of cannabis: is Lauterbach threatened with...