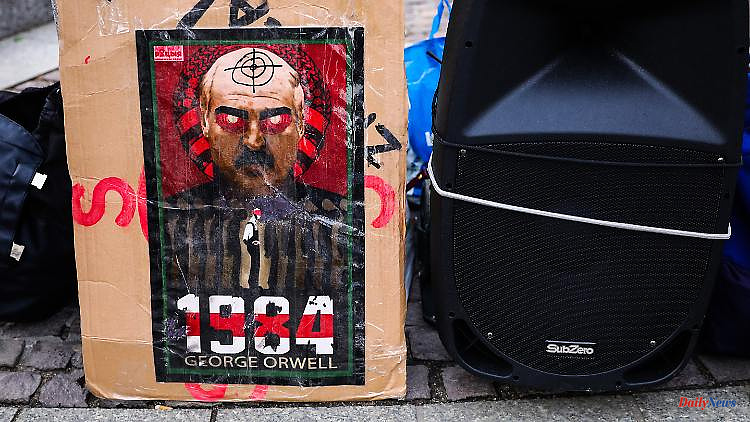 Everyday life in Belarus is increasingly resembling the plot of George Orwell's dystopian novel "1984". The state spreads hatred against the national language. Anyone who rises up against dictator Lukashenko risks the death penalty. No wonder Orwell's book can no longer be sold in Belarus.

Against the background of the war in Ukraine, the authorities in authoritarian Belarus are increasingly cracking down on civil society. A few days ago, the ruler Alexander Lukashenko signed a law extending the death penalty. At the same time, the ideological cleansing is continuing in the country. A new bookstore specializing in Belarusian-language literature in the capital Minsk was closed after just one day and the employees arrested. And even a classic of world literature is now banned.

George Orwell's dystopian novel "1984" can no longer be sold in Belarus. This is reported by the opposition newspaper "Nascha Niwa", citing a corresponding government decree that the editors have received. Accordingly, "all versions" of the book would have to be withdrawn from sale by May 19. Some state bookstores have already confirmed the ban.

The novel, which depicts a totalitarian surveillance state, has enjoyed renewed popularity since the mass protests against Lukashenko's controversial re-election in August 2020. In the state bookstore chain "Belkniga", Orwell's dystopia was number four on the bestseller list, more than 70 years after the work was published. In 2020 and 2021 the book was reprinted in Belarusian.

The publisher Andrei Januschkevich, who brought the new edition onto the market, is currently in prison. However, his arrest has nothing to do with "1984". Although one could well imagine a similar scenario on the pages of Orwell's novel. On May 16, Yanushkevich opened a Belarusian-language bookstore in the center of Minsk. Just a few hours later she had to close her doors again. Belarusian is a state language alongside Russian in the post-Soviet republic, but is suppressed by the regime.

Immediately after the opening, three prominent propagandists came to the store to criticize the selection of books and the very existence of a Belarusian bookstore in Minsk. "There is not a single book here in Russian," they complained in a video on Telegram. There is also no department "dedicated to the Great Patriotic War," said Stanslav Yaskevich, a blogger loyal to the regime.

Lyudmila Gladkaja of the country's largest newspaper, Sovjetskaya Belorssiya (Soviet Belarus), also criticized the authorities for allowing the "ideological divergents" to open such a bookstore. She warned against repeating protests. "If 2020 repeats itself, you will ask yourself how that could have happened," said Gladkaja. And Ryhor Azaronak from TV channel STV added: "Should the President take up the submachine gun again?" On August 23, 2020, Lukashenko appeared in black gear and wielded a Kalashnikov submachine gun as tens of thousands of peaceful protesters gathered in front of his palace in Minsk.

Just a few hours after the propagandists' complaints, the police also came to the bookstore and searched it. The publisher Yanushkevich and a bookstore employee were arrested. Opposition politician Franak Viacorka compared the crackdown on the deal to the plot of another dystopian novel, Fahrenheit 451. In this book by Ray Bradbury, the fire department's job is to burn books rather than put out fires. "Lukashenko sees dystopian books as manuals," Viacorka wrote on Twitter. The bookstore saleswoman was sentenced to 13 days in prison for "hooliganism". Yanushkevich must be behind bars for 10 days. Authorities confiscated 200 books and ordered the store closed.

Opposition politicians and activists face significantly higher penalties in the future. A few days ago, Lukashenko signed a new law, according to which preparing and "attempting an act of terrorism" can be punished with the death penalty. According to experts, the tightening of criminal law serves to prosecute political opponents of Lukashenko. In Belarus, "everything can be classified as terrorism," said Belarusian lawyer Dmitry Laevsky in an interview with the online portal "Mediazona". "Among other things, political protests fall under this description".

1 40 billion dollars for aid: USA decide on new Ukraine... 2 Ross, John and May: Mega concert for Queen is taking... 3 From favorite to attractive figure: the crash of golf... 4 Dissolution of parliament is possible: government... 5 RKI report on BA.5: New omicron variant spreads slowly 6 Twelve howitzers 2000 for Ukraine: Scholz and Rutte... 7 Anti-ship missile for Ukraine?: "Harpoon"... 8 The day of the war at a glance: Hundreds of other... 9 Magazine wants to know gender: Report: Singer Rihanna... 10 Dow Jones closes in the red: inflation is increasingly... 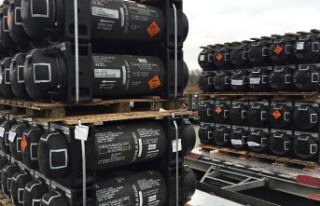