After false accusations made against Garrido & Corbiere, an investigation was opened into fraud

After false allegations in "Le Point" about the "rebellious” deputies Raquel Garrido & Alexis Corbiere were published, an investigation was launched, according to the Paris prosecutor's Office.

After false allegations in "Le Point" about the "rebellious” deputies Raquel Garrido & Alexis Corbiere were published, an investigation was launched, according to the Paris prosecutor's Office. This confirms information from BFMTV.

Last week, Le Point published an article in which it accused the couple of exploiting an undocumented cleaner. He immediately denied the accusation: "Everything is false", protested his deputies. The article was removed from the internet the following day, which is rare. The conservative weekly addressed its readers on Tuesday, admitting that the article was "false" and misleading.

"External smoking" was invoked by "Le Point", who wrote: "People likely sought to sell an untrue story to discredit RaquelGarrido and Alexis Corbiere." The weekly explained that screenshots of text messages between Raquel Garrido and the false employee were published by the journalist as "a rough montage".

"Le Point" also opened an internal investigation. Aziz Zemouri was fired and summoned for an interview before being dismissed. Two complaints were filed by the deputies, one against X and one against X regarding identity theft and forgery.

Monday's statement by Etienne Gernelle, director of Le Point, was that false information had been "invented by unknown speakers" and then relayed by a journalist who "melted a lead".

The journalist from the "Point" Aziz Zemouri filed a complaint against Jean-Christophe Lagarde, a former deputy UDI, and an ex-policeman. He claimed that Lagarde had contacted him at May's end to get him to connect with a woman claiming she was the cleaner, undeclared and lacking papers of the LFI deputies.

Raquel Garrido (48), was elected deputy to Seine-Saint-Denis, against Jean-Christophe Lagarde, in the second round legislative elections held on June 19.

1 Heavy rain, doping raid: Pogacar shocks competition... 2 Basketball. In the elite, Benjamin Boury, a Savoyard... 3 To applause, the flag of the European Union is carried... 4 New cover for "Renaissance": Beyoncé feels... 5 India bans single-use plastics to prevent them from... 6 There is no "big resignation" in France,... 7 North Rhine-Westphalia: Three new people meet: Cologne... 8 Bavaria: FC Augsburg wins a friendly against Eichstätt:... 9 Support for Ukraine, Creation of a "climate Club... 10 Valence. This Saturday, a rally to defend abortion... 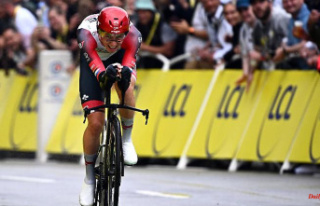