The Dyson Purifier Cool Formaldehyde should not only remove pollutants from the room air, but also serve as a cooling fan if required. 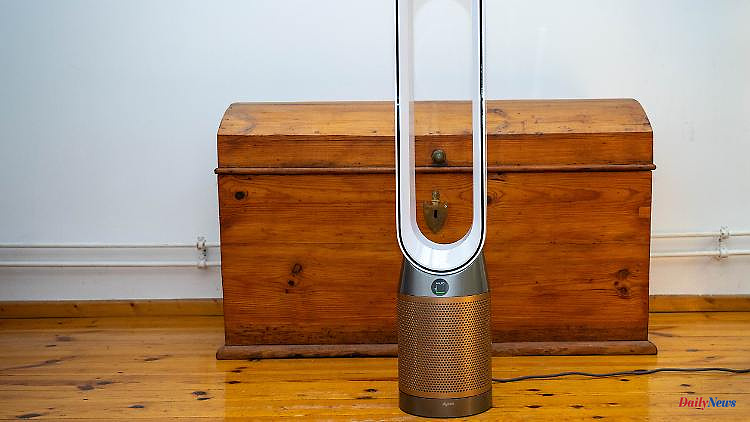 The Dyson Purifier Cool Formaldehyde should not only remove pollutants from the room air, but also serve as a cooling fan if required. ntv.de tried out whether the expensive device keeps what it promises.

An air purifier takes up space and is not always an eye-catcher, the same applies to fans. If you only want to place one device in the living room instead of two, the Dyson Purifier Cool Formaldehyde could be the ideal solution, because it can do both and also looks interesting. The only question is whether he does his two jobs well. ntv.de tried it out.

Compared to most other air purifiers, the device looks really snazzy with its gray and gold base and white fan shaped like the eye of a large needle. That's a good thing, because the air cleaner-fan combination is over a meter high. You can hardly hide it, because in order to function optimally, it should stand reasonably freely in the room.

Commissioning is child's play: you remove the covers from the base, insert the two Hepa/activated carbon filters supplied and close the device again. Then you install the associated app, turn on the Dyson and follow the instructions. After a few minutes you're done.

It comes with a nifty little remote control that sticks magnetically to the top of the fan so it doesn't get lost. It is supplemented by a color display in the base, on which all relevant information can be displayed. This includes the measured concentrations of particulate matter, nitrogen dioxide and other oxidizing gases, volatile organic compounds (VOC) and formaldehyde, as well as room temperature and humidity.

All information and control options can also be found in the app, which offers additional details and a history. In addition, you can program in it, in which periods the device should work in which modes. If you want, you can also connect the Dyson Purifier Cool Formaldehyde to the digital assistants from Apple, Google and Amazon and control it by voice command or with set-up routines.

Pollution from pollen, bacteria or viruses is not recorded. However, the Hepa 13 filter captures them almost 100 percent because it also stops particles smaller than 2.5 microns (PM2.5). Nor can odors be measured, which the activated carbon filters effectively neutralize.

Normally you leave the settings to the automatic system. Sensors then measure the air pollution and the device adjusts the air flow accordingly. If everything is in the green area, the Dyson pauses, if values ​​increase, it starts again.

In addition, you can specify whether the air should flow straight forwards or backwards and set oscillations between 45 and 350 degrees. The Dyson Purifier Cool Formaldehyde moves completely silently.

The exact filter performance cannot be determined without special laboratory equipment. With the help of the sensors of a Livy Alive station and a Philips room cleaner AC2889/10, ntv.de was able to understand quite well that the Dyson Purifier does its job. Among other things, it reacts quickly to air pollution and odors that arise during cooking. He reliably removed cigarette smoke or the smoke from extinguished candles, and he quickly ended an unhealthy experiment with waterproofing spray.

However, ntv.de could not understand how well the air purifier can reduce formaldehyde. The device never showed a measurable concentration of the pollutant during the test period.

It should be noted that according to Canadian consumer service CBC News, Dyson air purifiers do not offer the highest CADR values. They indicate how many cubic meters (m³) of air are filtered per square meter and hour.

However, Dyson considers the Clean Air Delivery Rate to be of little significance. The value is determined in test chambers that are too small, between 28 and 30 m³, and air purifiers are placed centrally in them, according to the criticism. In addition, additional fans provided air circulation and the usual automatic mode was not used for testing.

"At Dyson, we do not believe this represents a representative space for measuring the performance of an air purifier in modern homes," the US company said in a statement. It itself uses test rooms over 80 m³ without fans and lets its air purifiers placed in a corner work in automatic mode.

Whether the Dyson Purifier Cool Formaldehyde filters better than its competitors or not remains to be seen. Anyway, it's effective. After he could no longer determine any critical values ​​in the tests, everything was fine with the previously deactivated Philips air purifier and the Livy Alive station.

With restrictions, the device can also be used as a fan in the summer heat. At the highest level 10, it makes a lot of wind and cools very well even at a distance of five meters. However, the air purifier then murmurs so loudly that it disturbs you when you watch TV or only die-hards can do it.

The fan is not really quiet even on the lowest level or in night mode. For sensitive people it is not for the bedroom. For them it is worth buying a good fan that is almost silent in whisper mode.

Otherwise, the Dyson Purifier Cool Formaldehyde is a good room air purifier that impresses with its great design and extensive equipment. Whether this is worth at least 640 euros is another matter. In addition, there is an annual fee of 75 euros for replacing the activated carbon/Hepa 13 filter; the formaldehyde filter works catalytically and therefore does not have to be changed. 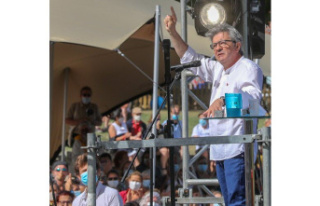