The Berlin Schützenhilfe worked: the SPD state chief and his general received top results when they were re-elected. 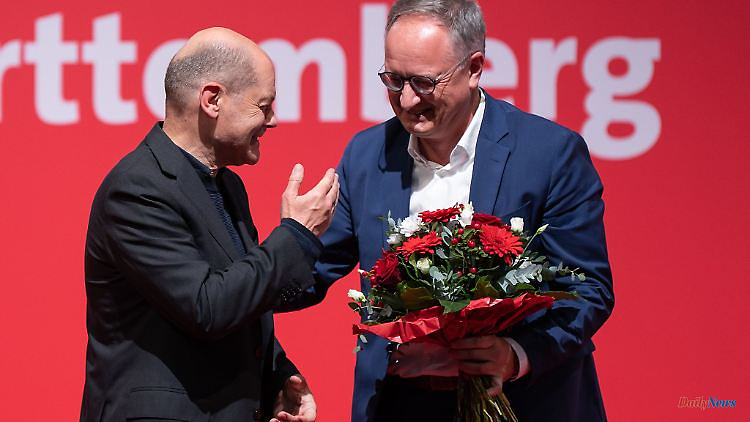 The Berlin Schützenhilfe worked: the SPD state chief and his general received top results when they were re-elected. But for now, the party will remain walled in in opposition for a while.

Friedrichshafen (dpa / lsw) - The Baden-Württemberg SPD has strengthened its leadership despite weak approval ratings in the country. After a combative appearance by Chancellor Olaf Scholz at the party conference in Friedrichshafen, SPD state leader Andreas Stoch was confirmed in office for another two years on Saturday. He was the only candidate and received 95.6 percent. The 53-year-old lawyer from Heidenheim, who as parliamentary group leader is also the opposition leader in the state parliament, has led the party together with Secretary General Sascha Binder since 2018. The 39-year-old Binder was also re-elected, receiving 85.0 percent of the votes.

The SPD ended up with only 11 percent in the 2021 state election and is currently between 13 and 15 percent in polls - far behind the Greens and CDU. In his speech in front of an audience of around 600, Stoch lamented the "standstill" under Green-Black. The more the traffic light government tackles the federal government, "the clearer it becomes how little progress is being made in this country." Even with the expansion of wind power, things are not progressing under Green Prime Minister Winfried Kretschmann. "This country is not governed green, it is governed by a green man." The SPD is pushing for more help for the poor in the crisis and for more investment in education and the expansion of renewable energies.

In his speech right at the beginning of the party conference, Scholz took on the Union and CDU leader Friedrich Merz, who had blocked the new citizen money of the traffic light federal government in the Bundesrat. He held the CDU and CSU inconsistency. Although they carry the slogan "Achievement must pay off" in front of them, the Union doesn't care about low earners. As an example, Scholz cited the increase in the minimum wage to twelve euros. He was not surprised that the Union did not participate in the decision. "But the fact that the Union didn't even manage to raise its hand a little bit when the vote in the Bundestag was about it and agree to it, that's aloof and that's snooty," he said. "And that has absolutely nothing to do with 'performance must be worthwhile'."

SPD federal leader Saskia Esken addressed the conflict over citizen income directly and accused the Union of "fake news" because it claimed that the new service no longer makes work worthwhile. "Most of all, this line of reasoning is shabby because it pits poor people against the poorest." The Union has an "unfathomable image of man," Stoch added, the citizens' income would have been long since in Baden-Württemberg, if a "future coalition" of Greens, SPD and FDP governed as in the federal government. But Kretschmann rejected such a traffic light alliance after the election in favor of green and black.

Stoch's four deputies were also re-elected. Rita Schwarzelühr-Sutter, Parliamentary State Secretary in the Federal Ministry of the Interior, received 90.7 percent. Jasmina Hostert, member of the federal parliament from Böblingen, received 91.1 percent and Dorothea Kliche-Behnke, member of the state parliament from Tübingen, received 86.3 percent. 84.6 percent voted for Parsa Marvi, who sits in the Bundestag for Karlsruhe. DGB head of state Kai Burmeister was elected to the state board with the best result of the assessors. The 46-year-old trade unionist received 88.9 percent and replaced IG Metall district leader Roman Zitzelsberger. 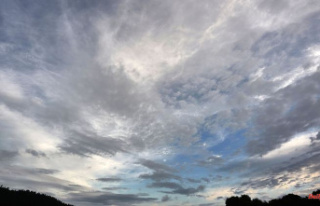 Hesse: Cloudy start to the week in Hesse